I think I probably owe Georgette Heyer a bit of an apology.

The other day I was at work, sitting in my boss's comfy chair and eating some lunch while reading Devil's Cub and our Jeweller asked me what I was reading. I said "The kind of novel you buy for five dollars at an airport and then throw out when you reach your destination." You see, in my head, the works of Georgette Heyer were much akin to Mills and Boon novels. I think this largely comes from an earlier reading of a book called The Fiction Class, in which the main character has been named after a Heyer book by her vapid mother.

Well. At the time of making those comments, I was fairly sure I was right. I'd only read the book a chapter at a time and it seemed to be all heaving chests and duels. And then of course, I started to like it. I found that I really connected with Mary Challoner, being the older, less... popular sister, and even though I could predict the ending, I wanted to watch it all happen. It was a little more realistic than I had expected even. And I've spent the past two days lolling about in the sunshine finishing it.

Basically, the book is about Dominic, the Marquis of Vidal, who by today's standards would be deemed something of a "player". He's the son of the Duke and Duchess of Avon so naturally every local busybody wants their daughter married to him and while he 'enjoys' feminine companionship (if you get my drift) he's not ever met anyone who he respected enough to marry. But, as is the womanly way, most girls believe they will be the one to change him. In the novel, his latest pursuit is Sophia Challoner, a blonde... well lets just call her the Barbie character. Sophia likes pretty clothes and to be flattered and flirted with. And then one day, Dominic has a bit too much to drink and shoots a man near-dead for insulting his honour. So Dominic writes to Sophia and tells her to run away with him to Paris. But Mary, the plain, bookish older sister (think... librarian type but feisty) gets the letter by accident and she decides to save her sister's reputation by going in her place. No prizes for guessing what happens. 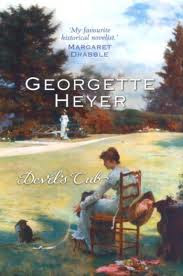 The ending does seem somewhat rushed however, and Mary DOES run away an awful lot. But as an aspiring historical novelist I have to commend Georgette Heyer for her ability to make me speak very formal English for the next half an hour after I finished it.

Also, I found a small typo in my copy of the book.

"Mr Comyn said sarcastically that he was happy to be a source of so much interest, but since he spoke no English, no one understood him." (p.230)

I had a bit of a giggle at this. Mr. Comyn speaks English very well, actually, and other characters remark on it often. It's French that he has no grasp of. And the idea of an Englishman being unable to speak to French servants because he can't speak English is quite funny. Oops, Avon Publishing.

I've only just found out that it is part of a trilogy, and not the first part either. I think it's great that it stands alone, although I did expect that perhaps there was some volume to come before it about the courtship of the protagonist's parents. I suppose that is all gobbledegook to most of you though...

Well, I just hope that I enjoy the rest of my uni books as much as I enjoyed this one. I shall endeavour to review them all on here for... ahem... research purposes.
Labels: historical fiction inspiration reviewing uni