Thoughts on: Dr No (Ian Fleming) 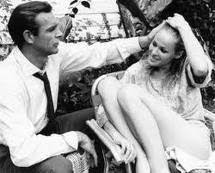 I would like to introduce you to some friends of mine. Not close personal ones or anything, but people that I've spent some time getting to know over the last week or so. You're probably going to say "That's Sean Connery and Ursula Andress." Well, actually you'd be wrong. Because I'm not talking about the actors. I'm talking about James Bond and Honey Rider. Or if you read the books rather than just watch movie versions, Honeychile to be perfectly accurate.

I'm not exactly a Bond fan. But I've watched a lot of the films. Dad and I went through a phase of watching them when they were on foxtel. I may have been in year 12 at the time but it could have even been last year. My memory isn't the most reliable, and therefore it won't surprise you if I say I don't remember much of the movies. I can tell you that the first one I saw was one with Connery in it, and there was a shark, and it may have been... no I was going to say Never say never again, or Die another day, and I think those are both Pierce Brosnan. I've never seen any of the Pierce Brosnan ones I don't think. I've seen the Roger Moores, the Sean Connery's, the George Lazenby (which is fun to turn the sound off on and redub over with friends, if you're looking for a party game. Alternatively, 10 points to anyone who invents a Bond drinking game. Perhaps every time he says a cheesy line...)

I'm a little off track. So for class I read Dr. No. And in the middle of reading Dr. No, I watched Dr. No. And is it just me or is the movie villain a) up to a lot more bad stuff than the book one and b) a lot more sadistic. Also, I wouldn't thought this possible, but the book is overtly... kind of romantic, aside from the whole fact of him moving on to a new girlfriend in the next book. In the movie, Bond has... 3 women that he uh... hooks up with... and in the book there is only Honey. And the way he thinks about her is as more than an exploit, which was nice.

I can't say it was the best book I've ever read because the language was a bit over done and sensationalist, but hey, it passed the time.

And oh my god, I love Ursula Andress in that film. I love the way she talks. It makes no sense at all.