Thoughts on: One Hundred Years of Solitude (Gabriel Garcia Marquez) 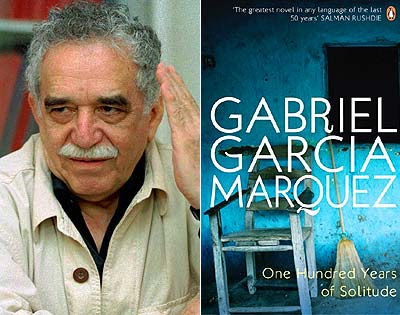 Aureliano Buendia never has to contemplate the answer to this. He doesn't have time. The manuscript, which after 100 years can finally be read, tells of his imminent destruction; seconds later, the village of Macondo is wiped from the memory of the Earth by apocalyptic winds.

This may be one of the most important books I have ever read. It raises several issues which I will briefly outline.

I'm not only a student of English Literature, I'm also a History student. It makes for an interesting point of contrast, when I realise under the influence of discourses like New Historicism and Post Modernism, that OFFICIAL HISTORIES do not exist. And just like a novel, history can be interpreted in a multitude of ways. While many read Garcia Marquez's work as the history of the Latin American people, others argue that this is precisely what the author intended not to do. I don't know what the official line is, but by using Magical Realism, perhaps it was his aim to show us that History, capital H for the official versions, is just another fairy tale.

Being alone, truly alone and isolated from those around you, like Colonel Aureliano Buendia in his silver workshop, making and remaking gold fishes and like Jose Arcadio Segundo Buendia, forgotten in Melquiades' workshop with some fifty plus chamber pots, is like living your death. The line between the living and dead is constantly blurred. I cannot pin point the part in the novel where the original Jose Arcadio Buendia, tied to the chestnut tree, stops being a corporeal being and starts being a ghost. And the only remedy for this living death is love. Lovers in this novel take on almost divine significance. Love has the power to turn sisters against each other, and estrange mothers and daughters. It knows no boundaries, and leads to incest, bringing the novel full circle just in time to obliterate Macondo forever.

Many of the supernatural events in the novel struck me as not supernatural at all. This is my own interpretation and not based on anything I have read. Rebeca's eating of non food items like dirt and plaster could easily be Pica, an eating disorder that appears to be on the obsessive compulsive spectrum. The birth of children with "pig's tails" to parents from the same blood line could be spina bifida. Even madness is viewed within the context of magic. Thinking about this novel in the context of the late 1960s, when it was written, it becomes clear that these sorts of things were not widely known about or discussed. And literature's purpose is to make sense of our lives; look how far we've come. Depression is a theme used by every television program aimed at teenagers. Asperger's Syndrome appears to be the popular disorder of the time, appearing in countless books and movies and TV shows this year.

I've written an article on Pica with this in mind for the next issue of Metior (themed Disorder) which should be on stands come exam time.

So those were just a few thoughts of mine. I'd like to end with a quote from the end of the novel, which I thought was perhaps the most amazing ending sentence I've read yet.

"...races condemned to one hundred years of solitude did not have a second opportunity on earth."