Thoughts on: The Left Hand of Darkness (Ursula K. LeGuin)

There are just a few little things I have to say about this book, and it is my last thoughts on for a while because the semester is over, so it's writing time... and then Barcelona time, which will be amazing!

The Left Hand of Darkness is one of those books that even if you DO NOT like Science Fiction and Fantasy, you have at least heard of it. I think I'd probably seen it for the first time in the library at my primary school because for a while people were constantly telling me to read LeGuin but I was never into it. And aside from a few favourites like Tamora Pierce, I never really jumped on the Speculative Fiction bandwagon. I've always been a realist novel kinda girl.

So needless to say, The Left Hand of Darkness kind of knocked me for six. First of all, it completely wrecked my reading schedule for the semester. I didn't finish it in time for the lecture OR in time for the tutorial the day after, which is just not me. I'm queen of the nerds usually, particularly when it comes to reading. But the theoretical side of the book was so intense. I struggled with the idea that the people on the planet Winter had no sexual characteristics at all. I kept imagining them as like people in morphsuits, or like people in bald caps painted as alien, but basically essentially male. It didn't help that the main character, Genly Ai, constantly referred to other characters by the pronouns "he" and "his". It's hard not to picture something masculine when the description is saying His face, His hands. And as a sometimes very outspoken young woman (ha! sometimes.) the fact that I couldn't imagine a world without gender was quite unsettling for me.

Maybe that was the point of the book. Maybe LeGuin wanted her readers to think about how much of the way they think about their identities is based on gender. Maybe she wanted to show us the way our world is split into all these binary oppositions. Dark, Light. Male, Female. Rich, Poor. Because at the end of the book, when Ai's own people come down in the rocket ship, he realises that he sees them as the ones who are not human, and the Gethenians who are both sides of the human binary at once, as the true humans. And I like that idea. I like it a lot. But even LeGuin has said she copped a bit of flack for the use of he, and the not completely realised notion of ambisexuality. Still, a lovely effort.

And speaking of *ahem* lovely efforts, this is me trying to draw a Karhidian... but I realise that it looks like a cross between a monk and the Last Airbender.... it was an exercise purely to see if i could draw someone neither male nor female. What do you reckon? 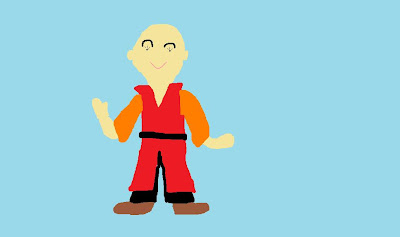