Western Australian Writing Review: A Stranger In My Street by Deborah Burrows

Imagine my surprise (and joy and a little bit of envy) to discover that finally someone has written a book about Perth in the 1940s.  A Stranger in My Street is the first novel from historian and lawyer, Deborah Burrows.  It follows the story of Meg Eaton, whose beau was killed in the war eighteen months before the story takes place.  Meg seems to be coping well, although she is secluding herself somewhat from the real world, until her dead boyfriend's brother Tom shows up in her street looking for her neighbour Doreen.  Doreen is nowhere to be found, and two days later Meg and Tom stumble across her body in an air raid shelter, and wind up involved in more ways than one.

Burrows has used her skills as a historian to paint a realistic and charming portrait of Perth in the 1940s.  No scene seems like it has been adapted from an American film, and the places are easy to imagine.  Some well known places wink at their future appearance.

The protagonist, Meg is a likeable and fully realised character, and her pain at the loss of her first love Peter hits home.  I think perhaps my favourite character had to be the conniving Phyllis Gregory, fiancee of Tom Lagrange.

In some ways, this novel appears to have been over-researched.  Characters speak to each other as if they are quoting dialogue from documentaries made after the fact, or war time posters.  The murder mystery plot itself is both overly complex (as the characters have a great amount of difficulty solving it) and too simple (because once it is revealed, you wonder why you hadn't guessed.) Cliched plot points like addictions to morphine and falling in love with the wrong person are rife.  Some characters flit onto the page (Meg's sister Joan for one) when they are necessary and disappear like 2D cardboard figures who have fallen over in the breeze when they don't advance the plot.

So what is it that kept me turning the pages?

I think perhaps what I most liked about this story was that it recognised an under utilised market in the writing world.  Second World War novels (particularly romances) are incredibly popular and yet to date there have been few of note published about Perth.  I took a special interest in this novel because I had also attempted to write a novel set in this time and done incredibly poorly.  So while the researching of this novel was at times painfully obvious, I enjoyed reading it from a writer's point of view and learning some of my own mistakes at the same time in observing Burrows's strengths. 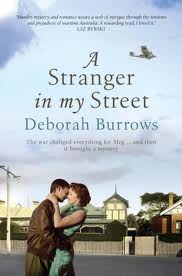 So, is this a good book or an average one?  The jury is still out.  I think I'll have to read it again.

In the mean time, what are your thoughts?
Labels: a stranger in my street Deborah Burrows reading recommendations western australian writing review