Aussie Writing Review: All That I Am by Anna Funder

First of all, to the lovely lady who comes to the bookshop I now work in every Sunday, I am so sorry it took me almost a fortnight to finish this book.


We now return to our regularly scheduled broadcast.

Late last month (or was it early this month?  Time folds in on itself these days...) Anna Funder's All That I Am was named the winner of the 2012 Miles Franklin Literary Award.  The sophomore novel from Funder (whose first novel was Stasiland), All That I Am follows the plight of exiled Jewish Socialists Ruth, Dora, Hans and the writer Ernst Toller during the early 1930s and the beginning of Hitler's regime through the lens of Ruth's remembrances as an old woman in the early 2000s.  A poetic and slightly cynical novel, Funder has created a world of stark insight and through her characters she delivers a number of truisms on love, loss and the nature of human relationships tested by adversity.

It is a stunning novel, and there is no doubt in my mind that it is deserving of many literary platitudes.  (And coincidentally, before winning the Franklin, All That I Am also earned its writer the Barbara Jefferis Award.)  Funder herself is eloquent and intelligent.  To read her Franklin acceptance speech and giggle at the backhanded comments she makes about the loathsome Fifty Shades trilogy, please click here.

What makes All That I Am all the more haunting is its basis in reality.  Dora, Ruth and Ernst Toller were all real people.  The novel has been meticulously researched, and the character of Ruth (as you will read in the acknowledgement) was also a friend of the authors until her death in 2001.  No wonder the pages are tinged with sadness, and the feelings of loss so well-captured.  For any lover of history (or any student of modern history of my generation, for surely we are all still well versed in the curricula on Nazi Germany) the novel slides neatly into established facts.  Sources such as Richard J. Evans supply grounded dates and names which associate Funder's narrative with the 'known' history. 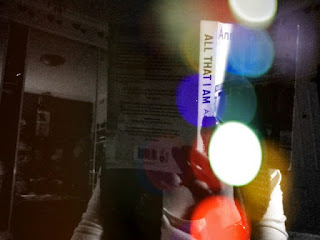 I have to wonder, however, why this novel which recounts events in another country and another time has been the recipient of this particular award, when the Miles Franklin is ostensibly an award to celebrate novels which represent Australians as we are now.  Ruth Becker's early 2000s Sydney could be anywhere bar the few mentioned street names, and her forays into memory make up the majority of the text.  At times, it seems like the portion of the text devoted to Australia is as insignificant to the the novel as it could possibly be. The 2012 shortlist also included such highlights as Favel Parret's Past the Shallows and Frank Moorhouse's Cold Light, both set here.  So why All That I Am?  Does the literary merit of the novel far outweigh its competitors, rendering its geographical fixation irrelevant?  Or is there some other factor at play here?

Perhaps one explanation could lie in the book's very international and inter-time-dimensional outlook itself.  Just a few years ago, there was public outcry over the Miles Franklin's reputation for choosing books by men about men who still live in the outback and farm sheep (or something like that...)- in short, for being too inward in their focus, and too indicative of an isolated Australia view largely representative of what the rest of the world thought of us.  But Australia is a country made up of refugees, immigrants and travellers, all of whom have personal histories and memories to share, like Ruth Becker. Our place in the world is global and historical.  All That I Am is a book which represents this.

Not insignificantly, it is also a book by a woman, and women dominated the shortlist this year at three to two.  That deserves a little cheer from this camp.

If you are looking for a deep and meaningful read, one which will make you emote (for lack of a word that won't give spoilers) then pick up a copy of All That I Am.  And share it around.  It is a highly accessible, readable book which deserves to be discussed.

Four out of five dossiers from me.

Labels: 2012 all that i am anna funder australian literature book review miles franklin