I always have to read Tim Winton novels twice to fully take them in.  Cloudstreet, The Riders, Dirt Music; all these are books which are read in a kind of relaxed fugue state.  The nostalgia and the landscapes wash over you.  Later, you think to yourself 'could that possibly have been in the book or did I dream it?'

In her article "Place, Taste and the Making of a Tradition" published in Westerly, 1982, Veronica Brady mentions something she calls the Robinson Crusoe impulse- the desire to make a self and a world- which pervades Western Australian literature.  No novel demonstrates this more than Dirt Music. The protagonist, Georgie Jutland, is searching for a self, making one.  Luther Fox wants to forget his self and his past.  Instead, he makes a world.

The pair live in the fictional coastal town of White Point, populated with fishwives, hippies, ex-cons and racists.  Their day to day lives are put under the microscope through the points of view of the two outsiders, Georgie and Lu, and shown to the reader as being base, disgusting, tragic, but above all, human.  Despite the judgement that they seem to pass on all around them, Georgie and Lu are far from perfect.  Alcoholic, escapist Georgie has lost her verve for life and spends her days living with the Fisherman King, Jim Buckridge simply for lack of anything else to do.  But she cannot shut off her emotions entirely, and the life without love, the shallowness and separateness of her relationship and the precarious, temporariness of her position begin to stifle her.  Georgie does what Georgie knows best and runs.  She is the typical Western Australian character, the traveller.  On the road, her car breaks down and this brings her into the life of Lu Fox.  Lu is a shamateur, a fisherman who 'fishes' from other men's catches.  He gets up early to raid lobster pots and steal from nets.  Georgie knows this, thinks she is the only one.  They connect without really meaning to.  When Lu attracts the attention of the fishermen he has been poaching from, Georgie believes it is her own fault.  The secrets of her town and her friends unfold before her like a map.  And Lu leaves. 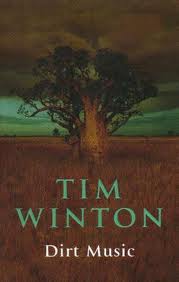 Dirt Music is part Defoe, part Shakespeare.  Like Robinson Crusoe, Lu Fox becomes king of his own island, far from civilisation.  Unlike Crusoe, he does this by choice and hides from anyone who might find him out and rescue him.  The novel's ending feels like a beginning- the beginning to The Tempest perhaps, where enemy and lovers alike are thrust together by shipwreck and storm.

Winton's writing is intelligent and lyrical, at times heralding over the average reader its superior insight into life.  For the most part, it is detailed yet simple, poetic yet base.  Dirt Music is a superb novel grounded in familiar places and feelings.  At times, the plot seems almost too tangled; there are two many deaths and nature itself seems to have it in for the Foxes.  Yet the writing and the style make it feel believable, like in the hands of any writer but Winton, it would fail.

Next week I will be seeing Signs of Life, a play which follows on from the novel.