The Joys of Browsing, part 1

I can vaguely remember a time when buying a book meant reading it straight away.  Trips to Dymocks as a pre-teen usually involved a promise on the part of my mother that each of us kids (there are three of us, myself and a sister and a brother) could choose one book to take home.  Even then, telling me that I could only have one was a little bit like telling me I had to choose which one of my limbs I most wanted to keep because the rest were getting cut off.  A lot of thought went in to my choices and I have vivid memories of spending hours standing under the yellow light in the YA section of our local bookstore, which used to be in the back corner.  There weren't nearly so many supernatural books back then.  I remember being adamant that I wanted Sisterhood of the Travelling Pants one time, even though Mum said she'd heard bad things about it.  What bad things exactly?  I can't remember.  Maybe she thought it was too teenaged, too American, in the sense of characters saying Oh My GAWD every five seconds and heading to the mall.  This is the lesser of two evils these days, when the other choice is a novel about half-zombie heroines who all seem perfectly normal/ slightly on the unpopular side but have secret magical powers/ are the object of lust to a vampire-werewolf-evil wizard/ son or daughter of the book's antagonist, revealed at the end of the story.  But the lack of choice in the YA market is a rant for a different day.

Another memory, another bookstore- this time in Fremantle, in a white and green shop with low shelves and apparently, low sales as it didn't stick around long into my teen years.  I would have been about eleven.  I remember choosing Tomorrow When the War Began, possibly because my friends were reading it, and being very proud of myself when, upon running into my Netball coach at the till, I learned that the Year Nines at her daughter's high school were reading it for class.

I'm sure there were many similar instances.

I think I moved on to "Adult" fiction quite early (Scare quotes there used because the line these days is so blurred- I would readily recommend a lot of popular adult fiction to young adult readers in their mid to late teens) and once I started I literally couldn't stop.  Today there are more than one hundred unread books sitting on the top shelf of my two Billy Bookcases (yes, from Ikea).  There are so many that I am too ashamed to show you a picture.  I have had to make stacks rather than shelving them properly.  It is far too easy to walk into a lovely book store and walk out with four, or five, or six...  There are too many lists published of "Books you Should Read" (I'm looking at you, Dymocks 101) that I garner new favourites from, and compared to all this, there are just too few reading hours in the day.  Thank heavens for coffee. 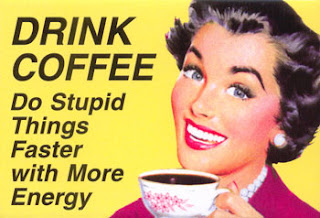