" It was once said of Catcher In The Rye, "That rare miracle of fiction has again come to pass: a human being has been created out of ink, paper and the imagination." I am no J.D. Salinger, but I have witnessed a rare miracle. Any writer can attest: in the luckiest, happiest state, the words are not coming from you, but through you."  - Ruby Sparks, 2012 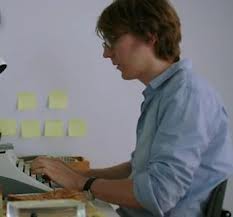 There is a little over a week to go until my deadline is here.

When I say "My Deadline", I am quite sure that I have given you the impression that all this time I have secretly been working on a publishing contract that none of you knew about, but it's not true. My deadline is actually the cut off for a competition that I am entering.  I have about 13 000 more words to write until I have enough to submit, but this is child's play because I am just re-doing a novel that I have written and rewritten and rewritten again.  What's different about this time is that I have done research, and I have lived the life of the adult writer, not the student writer.  I have felt the awkward tipping of the scales of life; the balance between writing and working, between writing and actually seeing the people who care about you and who you care about.  I have probably not dealt well with this, but sometimes it feels as if this book is all I care about.  At other times, I care not for it at all.  There is nothing like a deadline (albeit it self imposed) to fill me with self doubt.

Last week I received by email a rejection for the piece that I spent most of last year working on.  I suspect that a) it was too long and b) the editorial suggestions of one of my tutors messed with the authenticity of my narrator's voice, but because we live in a busy world and no editor has time to give feedback, I may never know.  I remarked to my mother when I told her that perhaps instead of being good at writing, I simply enjoy it.  I was upset about this at the time, but it's probably one of writing's more important lessons that this is how it is supposed to be.  After all, many of the greats, including Flannery O'Connor, were quite hard on people who believed that they were good at writing rather than doubting their work at every turn.  Think of Proust, writhing in agony over simply choosing the right word.  I am not Proust.  I am glad not to be Proust.  And I am glad to write, particularly on days like today (or rather nights like tonight) when I am able to experience the Salinger Phenomenon and just experience words and sentences and character's voices passing through me.  It's a little like writing and dreaming all at once.  I woke from this state feeling deeply dehydrated and exhausted and yet I cannot sleep.  I think my fingers have had a little too much coffee because they were desperate to keep writing, and therefore this post.  I hope that I will be lucky enough to experience this phenomenon again soon, perhaps next time with a full water bottle near by.