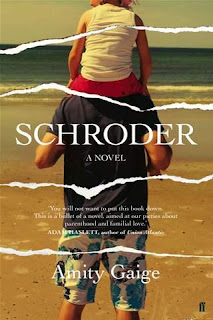 It took me a while to work out whether or not I liked Amity Gaige's Schroder or not.

While many reviews have compared this book to Nabokov's Lolita, Erik Schroder/ Eric Kennedy is by far not as interestingly dislikable as Humbert Humbert, nor is he as literate.  Sure, he's literate in his own way, but not in that trippingly on the tongue Lo-li-ta way that makes a reader keep turning the pages of a book even though it's trying to get you on the side of a paedophile.

Let's get one thing straight first out though.  Eric/ Erik is not a paedophile and he does not abduct his daughter Meadow in order to have any sort of sexual relationship with her.  In fact, at one point when young Meadow declares she'd like to marry her father, he gently tells her that this is just not how it's done.

Eric, aside from not being a paedophile, is also still in love with his wife.  (Perhaps it might be a bit more accurate to say that he is in love with the idea of being in love with his wife.)  The divorce has been hard on him, not least because it means that he cannot spend as much time with Meadow.  Every parent thinks their child is special, but Eric seems to believe that Meadow is so uniquely gifted that the sun actually shines because of her, and it is for this reason that he decides he is going to extend his visit with her by as many days as he can.  And so, they take off.

Written as part confession, part love letter to Eric's estranged wife and Meadow's mother, Laura Schroder is a lyrical expose of parental love and heartache, made more complicated by the fact that Eric is actually a downtrodden East German emigre who has invented his own life in order to escape the past.  At times, these two protagonists, Schroder and Kennedy, are difficult to reconcile, and the Schroder plot seems to be secondary to the crisis involving the abducted child- an afterthought, a less well-plotted subplot.  The effect is a questioning of what is real; the legal life, or the invented life that has been lived and loved.

Because of the choice to write the book as if it were a legal document, Gaige inserts footnotes (this is also because Kennedy is working on a kind of academic manuscript involving an encyclopaedia of pauses), which I found intruded on the poetic flow of the narrative.  This scientific format did not gel with the elegiac tone of the narrator, who had a beautiful way of describing the tender moments he was learning to appreciate as his freedom was drawing to an end.  Observe:

"The sun gives us a day, but who fashioned the hour?  What is supposed to be accomplished within its parameters?  How long is an hour supposed to feel?  That hour- the one in which we lay on the bed afterward, staring at each other in the underwater light particular to roadside motel rooms- that hour seems to be taking place endlessly..."  (Page 148)

In the end it was the beautiful sentiment that the book left me with which won out over its unusual style- the sense that this was a man with a lot of love that he was sending out to nowhere, who was now going to be imprisoned and "trapped in greyness" (just the way I have for phrasing what I felt) as a consequence of his one act of desperate love for his daughter.

I have to give this book five stars.