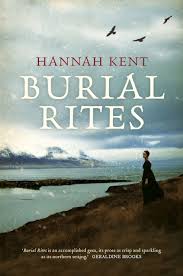 In 1829, a woman named Agnes Magnusdottir was beheaded for her part in the murders of two men, one of whom was her employer.  Prior to her execution, she was sent to the home of a District Officer to be minded.  There, she worked alongside the family of this Officer until such time as her execution was arranged.  These are the facts, what the historical record shows.  Everything in between are lacunae.

As a writer of historical fiction myself, I recognise the impulse to fictionalise moments of history that appear to go unexplained.

By now, you will no doubt have heard the story of Burial Rites' meteoric rise to literary fame.  Hannah Kent, young and gorgeous, is a rising star.  She became fascinated with Agnes's story on a trip to Iceland a number of years ago, made this the subject of her research, and won a competition which saw her working with Geraldine Brooks!  Needless to say, I am both impressed and a little jealous.  But what's more, Hannah truly deserves all of the hype she has been receiving, because the book is, in a word, a masterpiece.

It's original without being gimmicky, poetic without being overdone.  Wuthering Heights-like in its story within a story structure, the book reads like a lament, an epigraph, a loving obituary.  It does not paint the story of an innocent woman sentenced to die, but one of a real woman with desires and heartaches whose journey was no less wicked and magical than the people who condemned hers.

Kent's understanding of the use of narrative tension made this book impossible to put down.  Agnes' recollections would be stopped at just the moment when I felt something big was about to happen.  I would have to read on.  Her use of historical documents helped to build the reality of the story, as well as breaking up large sections of dialogue.  Agnes' scenes with the family served to build empathy, and made me want to believe that she was innocent before the recount had ended.

This book is an accomplishment.  I recommend it to everyone I know and everyone I don't.