Book Review: The Light Between Oceans 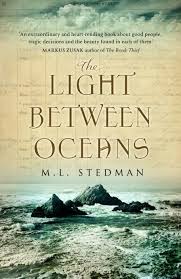 You've probably heard of this book.  It's been long or shortlisted for all the major prizes, won scores of accolades, and I am pretty sure that Oprah was endorsing it at one point.  People from Perth are particularly attached to it.  The writer, ML Stedman (charmingly reclusive), was raised in Western Australia even though she lives in London now.  And the book is set on the southern coast of Western Australia.  That's just enough to satisfy for local intrigue.  A constant best seller, this book has had editions printed in more than thirty countries now, has been described as 'unputtdownable', and is one of the most requested titles in the bookshop where I work.  This week, I decided it was finally time to read it.

1926.  Tom Sherbourne is a lighthouse keeper, a man of meticulous care and thoughtfulness with a past that he is trying to forget.  He meets and marries Isabel when he is posted to Janus, off the coast of Point Paratgeuse.  Their love is heatwarming, and their inability to have a live child, heartbreaking.  So when a baby washes up on the shores of their island home, in a boat with a dead man, is it really a crime that they decide to keep her?  Is Lucy a gift from beyond?  Will they be able to get away with it?

These are the questions that the book asks from the very beginning.  In the opening scenes of the book, before we know a thing about Isabel or Tom, we see the baby's arrival, see the decision.  We don't understand it yet.  The narrative then shifts back to Tom's arrival.  We see him meet Isabel, throwing bread for the seagulls.  They fall in love.  They go to Janus.  I've heard some people say that they thought this part was too long, that there was too much backstory, but personally, I think that it is necessary.  Without getting to know Tom and Isabel, first as individuals and then as a couple, it is more difficult to understand what they do in keeping the child.  Stedman cleverly uses this shift in time, this accumulation of backstory, to create sympathy for her protagonists.

Part of this novel's success could be attributed to the strength and consistency of its characters.  Tom is a constant throughout the book, a touchstone against which the rest of the rather intense book can be measured against.  He is, like the title says, the light between oceans, and as constant as the blinking light between the two bodies of water that surround Janus.  Isabel, on the other hand, is fun loving and sensitive.  She is a wonderful mother.  It seems impossible to think of her as a kidnapper- yet she is.  It is through Isabel's eyes that the reader is shown the world of Janus.  When Izzy maps the island, naming things and making a home in a way Tom has never thought to, the reader goes with her.  We see the lighthouse, the cliffs, and we see the graves of Isabel's stillborn children.  We feel her pain the way Tom feels it... distantly, helplessly.

It is the ending to the novel that I was confused by.  Many people had told me that they would not tell me what the big twist was so that I would be surprised (and I will try not to give too much away to you all here), but suffice to say that I was expecting something super big that never came.  It was the legal side of things with the ending, and not the back story in the beginning, that I found most tedious.  However, I do recognise that this was the most logical and possibly the only way that the ending could have played out.

Overall, I was inpsired by this book and I hated having to put it down.  I believe it deserves all of the awards it can carry.