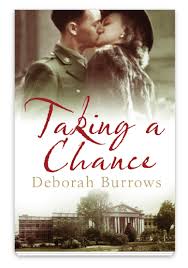 I've well and truly been living in the 1940s this last week, and what better book to take me there than Taking A Chance, set in my home town of Perth during 1943.  Having previously read A Stranger in my Street and finding it a little underwhelming, though still entertaining, I was expecting something light and fluffy.  Boy, did I get a shake up.  I could not put this book down, from before work yesterday and after, as soon as I got home I was scanning the pages like mad, and today (Friday) I have spent the whole day in bed, finishing it.  Deborah Burrows, I take my hat off to you.

Nell Fitzgerald is a journalist with the scandal sheet known as the Marvel, famous for her fashion and beauty tips, but her luck changes when the court reporter gets sick and she is sent to cover the murder trial of a beautiful artist.  At the case, she meets charming American, Johnny Horvarth and he enlists her help proving the woman's innocence.  Nell is attracted to Johnny but tries hard not to be, because she's practically but not actually engaged to a lawyer named Rob.  Add to the mix an at-risk fourteen year old named Evie that Nell takes in after she and Johnny rescue her from a lecherous American serviceman, and you have a recipe for a really amazing book.

I loved Nell Fitzgerald, I want to be Nell Fitzgerald.  Fashionable without being ditzy, Nell is a spunky romantic who can stand up for herself and really wants to make a difference.  And she believes in love even if she is too sensible to admit it to herself.  Her so called fiance is about as spontaneous as a wet rag from the sounds of things, and it is no wonder that she finds herself drawn to the excitement that is Johnny.  Johnny encourages Nell to do the things that she might usually be to cautious to try and this really opens up opportunities for Nell, who is happier for it. She is a girl who has never really seen her own potential as anything other than a pretty girl without some help.  Her journey is well written and it is easy to relate to.

One thing that really did attract my attention was the use of a lot of un-necessary adverbs.  This is quite a fast paced book, but when it slows for a moment, you will notice a lot of words ending in -ly.  It does make the narrative style seem a little bit simple, but the book is anything but.  It's historical perspective is refreshing and well researched, and at least the writing voice is consistent.

I highly recommend you read this book.