The Long and Short of It: The Spinng Heart by Donal Ryan

This post, a part of the The Long and Short of It series, is done in conjunction with Simon Clark from The Blether. 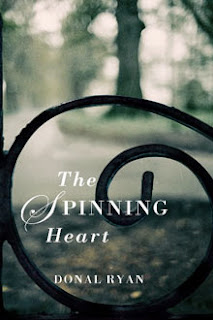 The Man Booker Prize longlist for this year was one dominated by Irish writers, including first time novelist Donal Ryan.  His book, The Spinning Heart, has already received rave reviews on sites such as The Guardian and Booktopia.  Its subject is bleak; a portrait of desperation in working class Ireland during the recent recession.  It is told from the points of view of several characters, each given the chance to tell their story in a dramatic monologue.  Although the points of view are never repeated, it is clear that the main characters are Bobby, Realtin and Bobby’s father Frank.

Each monologue overlaps in such a way that reading The Spinning Heart is a little like doing a jigsaw puzzle, except each time you approach the board from a different angle.  The audience is given a picture of a situation:  Pokey Burke, a local contractor, has invested a bunch of people’s money in a project that went bust, leaving all his employees high and dry without benefits, and the clients whose homes he was building are stranded in a ‘ghost development.’  Bobby was Pokey’s foreman.  He is a beloved figure in the town; respected by parents and looked up to by young men.  He is married to Triona, and only she knows the extent of the damage in Bobby’s soul recalcitrant from the death of his mother and the unkindness of his father.  He spends his days waiting for his father to die so that he can inherit the family home, which has a spinning metal heart on the front gate.  When Bobby begins paying visits to Realtin in the unfinished housing block, he is there to do odd jobs that Realtin keeps inventing so that he will come back.  But the gossip mill starts to invent a romantic tryst, and then, when Frank turns up murdered with his head bashed in, it seems too easy to say that Bobby wasn’t the man that everyone thought.

In this time of desperation, prejudices are rife.  Friend pits against friend, rumours fly about like missiles.  To the “Teacup Taliban” of gossiping church women, Realtin is “just a blow-in”.  Everyone is feeling sorry for themselves and no one is deserving of special attention, not even when Realtin’s son is abducted from the illegal daycare run by Kate and Denis out of their home.  The big question hangs over all the characters:  will this mess be sorted out?  Or is everything far too tangled?

This novel is full of tightly formed and beautifully expressed scenes.  There isn’t a sentence which is overwritten or clichéd.  Ryan’s characters take on a life of their own, although his female characters are all a little transparent and seem only to advance the plot rather than say something of merit.  The exception to this is Mags, who describes the pain of realising she has lost her father’s love because she is a lesbian in such piquant detail that it made my heart ache.  But even this seems tenuously linked to the rest of the plot.  My favourite scene takes place on page 58, during which Brian describes losing his girlfriend Lorna:

Then she started looking at me really closely, and sort of laughing nervously, and asking was I crying.  Are you crying?  Jesus, Bri, are you actually crying?  I was in my hole.  Dopey bitch.  As if I’d cry over her.  She’ll be crying the next time she sees me…I kicked her bedroom door before I left though.  JESUS, she went.

You can’t see it much in this quote, but Ryan has written a lot of this book in a very Irish vernacular, auld for old and wan for girl, etc.  This gets extremely confusing.  The use of the word our, for example, is not one I am familiar with.  Either you go the tacky route and have a glossary, or you make it clear from context, says I.  Or you don’t do it at all.  Unless you don’t want your book to make it overseas.

One last gripe.  I was infuriated to see that Frank’s chapter took place from beyond the grave.  This was unnecessary and implausible.  We already had the account of his death from the killer’s point of view, so we didn’t need Frank to tell it in his own words.  This was an uncharacteristically low point to the novel.

All in all, I really wouldn’t be surprised if this book DID win the Man Booker come October.  It has echoes of Julian Barnes’ A Sense of An Ending, certainly, but we shall just have to wait and see, won’t we?
Labels: book review donal ryan man booker prize random house simon clark the blether the long and short of it the spinning heart