It is a truth universally acknowledged that the author of a best selling series will be in want of a sequel.

Such is the case with Helen Fielding's Bridget Jones, who is back for more singleton adventures in the latest book, Mad About the Boy.  Yes, that's right- even though Bridget got her man at the end of The Edge of Reason, she's once again a singleton.  And if you don't want the book spoiled for you, I suggest you close this window right now.  I'll wait. 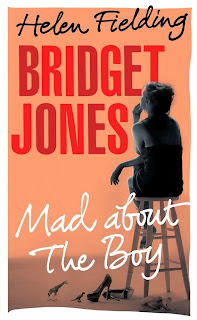 Alright, so if you're still reading this, you've either already seen the big revelation about this book or you just don't care if I ruin it.  Which is good, because in order to talk about why this book even exists, something big must be revealed.

In an interview, Fielding has defended her decision to kill top human rights barrister, Mark Darcy, saying that readers are most interested in Bridget's diaries when there is some sort of struggle for her to face.  If Bridget was to be happily married, with two beautiful children and finally settled, where would be the story.  This makes me wonder if Fielding might have the fabled but illusive perfect marriage in which in laws, messy houses, affairs and mortgages do not exist.  However.  Darcy is dead and Bridget is now the grieving mother of two to Mabel and William (Billy) who attend a posh school populated with children who have been given strange indie names, and busybody mothers ala  Where did you go, Bernadette, minus the hilarious antics with the mudslide.  (If you have not read that book, you really must.)

While entertaining, with genuine laugh out loud moments, I can't help but feel as if I have read this story before.  Bridget makes cringe-worthy mistakes in her career (think the HR Leavis fumble in book 1), carries on with totally unsuitable man and has lots of sex but discovers this is not the key to marriage, and finds love interest in the form of stern-but-sexy disapproving male.  Great.  Tried and tested formula, if slightly predictable.  As usual, Fielding's characterization is spot on, leaving me talking in disjointed Bridget-diary sentences for days on end.  Oh yes, and she's still worried about her weight, which fluctuates like crazy throughout the book, largely due to her bizarre and annoying tendency to eat entire bags of grated cheese.

When it comes to the supporting cast, I can't help feeling like I've missed something.  Bridget famously carried on her antics in a regular column in a British newspaper, but I've failed to catch up on those.  I've instead come in to discover that not only is Mark gone, but that he and Daniel have made up (yes, that is the sound of hell freezing over) and that Shazza, aka the one who said f*ck a lot, has moved away and been replaced by an older, glamorous, botoxed creature called Talitha.  As I've mentioned before, Bridget has also acquired some adorable children, but they must take after Mark because they seem far too intelligent at times for their age.  Perhaps that is the influence of the fancy prep schools.  Bridget's mother is still crazy, although now she and lumpy gravy Una Alconbury have been set loose in a retirement village as their husbands have passed on.  Luckily there are no orange Julian's in sight, and even the fling with the obviously gay pasty chef Pawl is a passing fancy.

Finally, I am loathe to mention Bridget's obsession with Twitter.  Yes, we were warned it was coming, but did we really expect it to be so much of the plot?  Maybe I'd discounted that as a possibility. Not only does Bridget count followers in her daily tallies, she actually conducts entire conversations on the medium and somehow manages to keep track of how many followers (and whom) she is losing with each passing tweet. This seems to prove that her use is a full blown fixation!  However, kudos to Fielding for managing to deal with Twitter as a writing medium in a way that not only made sense but did not dumb down the writing, only the main character, who has already proven herself willing to be dumbed down.  (Hedda Gabbler by Chekhov.  Come on.  She used to work in a publishing house!!! It hurts...)

All in all, this book brings back the Bridget Jones we know and love, older and a little more world weary.  If you were expecting much to have changed, you'll be sadly disappointed, but you will be jolly well entertained if nothing else.