Walking on Trampolines by Frances Whiting 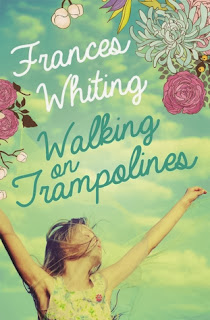 Tallulah (Lulu) de Longland has a slightly more complicated than average name, and a slightly more complicated than average teenage experience.  Growing up in the small town of Juniper Bay, Australia (coastal, of course, this is the country that produced Puberty Blues after all) nothing much has ever really happened to Lulu until the day that Annabelle Andrews decides that Lulu is going to be her best friend.  Annabelle is part of a family of notable, eccentric artists.  Her parents are really non-traditional and out there but Lulu loves them and Lulu loves Annabelle although sometimes she secretly wishes that Annabelle would leave her alone a little bit.  Still, their best friendship is special in the way that all best friendships are- marked by summers and secrets and sunburns.  It looks like she's going to have a great life.

And then she finds her boyfriend Josh with Annabelle and it all goes off the rails.  Cut to four years later and Lulu is doing admin work for her Dad, a small town plumber, and running around after her manic depressive mother, who names her dresses and marks her moods by them.  That's what Lulu does.  She takes care of things and people.  But she doesn't take care of herself.  It's pretty plain to everyone, Lulu included, that she is running away from her feelings.  So her Dad takes some drastic action and fires her.  And kicks her out of home.  Lovingly.

Lulu goes to the city and gets herself a job that she is brilliant at- she becomes the personal assistant of a radio talk-back host named Duncan.  She also gets a life- slowly and with the help of her friends.  Duncan takes on the role of Fairy Godmother, even standing by Lulu when finding herself means making a huge, huge mistake.  But after all, don't things always get much much worse before they get better?

This is a highly original, funny, and well plotted book, with feel-good sub plots galore.  I couldn't help but feel like there were a few two many little sub plots about Lulu taking care of people, and I almost felt as through Duncan's method of ensuring Lulu got the prince was a little like going through the motions, but it obviously didn't bother me that much as I finished this book in a matter of hours.  It's the kind of book I've always wanted to write about the friendships I've formed and lost along the way, and Lulu is one of the most endearing and wholly real characters that I have encountered in a long time.

Thanks to Shelleyrae from Book'd Out for recommending this one!
Labels: book review finding yourself first love frances whiting friendship walking on trampolines