Cockalorum and other obsolete words

I was reading an essay yesterday in which the author was talking about forms of metaphor, and suddenly it occurred to me that since I have finished university, my vocabulary has been shrinking.  I no longer feel comfortable enough with words like "synecdoche" to use them in every day conversation.  This is a horrifying thought.

Although there is something to be said of being able to talk to other people without making it sound too obvious that you're smarter than they are, I am an English major with an Honours degree, and the less word power I have at my disposal, the less easily it is I can remember that fact.  It's like being a kinder-gardener and accidentally walking into one of the bigger classes.  The sense is acute: you do not belong.  Except that I do belong.  I was not always a kinder-gardener.  Someone has reverse aged me with some sort of machine.  Someone has taken my words.

Vocabulary is like any skill.  If you don't practice, you lose it.  Belittle those who use word of the day calendars as much as you like, but they're still going to beat you at the spelling bee.  (Side note:  I have never to this day forgotten the spelling or definition of the word paradox after it knocked me out of the Ozspell competition in year 7.  I also learned to take my time from that one.  It was a stupid mistake.  P-a-r-a-d-a-- doh!)  If I begin to doubt my control of the English language, it is a little like considering myself disarmed.

Is a large vocabulary really all that important?  Words and language are constantly changing and just as old words become obsolete, new ones are invented.  While I will never 'Twerk' or defend my actions because 'yolo', I can also no longer 'groak' or become 'crapulous' without the people near me looking at me oddly.  Still, written communication is my chosen field and I would rather contribute to its preservation rather than its demise.  I may not always use correct punctuation in my tweets, but at least I still say "you" instead of "U."
If the price of leaving the academic world is having to a work a little harder to expand my knowledge of the English language, so be it, lest not more wonderful words go the way of "slumpish", "apricitiy" and "twattle." 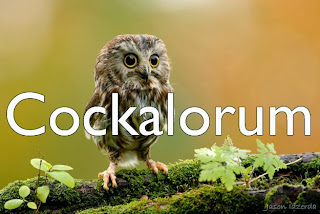