The Long and Short of It: The Marrying of Chani Kaufman by Eve Harris 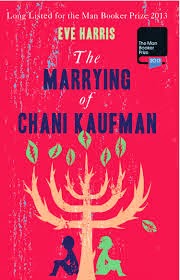 The inclusion of The Marrying of Chani Kaufman in the Man Booker Longlist is quite a coup, but will it prove a coup de grace?  First time novelist Eve Harris is represented by independent Scottish publisher, Sandstone Press who were also responsible for 2011 Longlisted title The Testament of Jessie Lamb, distributed in Australia by Allen and Unwin.  As yet, The Marrying of Chani Kaufman is not available through an Australian distributor.

Following the story of 19 year old orthodox Jew, Chani Kaufman, the book is a complex meditation on the meanings of marriage and womanhood among religious Jewish societies in the modern world.  Chani is set to marry Baruch, whom she has met just a few times before his proposal.  She has been rejected by other men in the recent past and views this opportunity as a frightening yet exciting prospect, and possibly her only option.  Chani could be considered a Jewish Elizabeth Bennet- one of eight girls from a family of mediocre income, marriage is considered crucial to Chani’s future happiness.  Baruch Levy, on the other hand, is the son of a Jewish businessman- and after all, a single Jew in possession of a fortune must be in want of wife, right?

Unfortunately for Chani and Baruch, what happens after the wedding (specifically, right after if you know what I mean) has remained shrouded in mystery thanks to religious dictums that prevent men and women from touching or discussing sensitive matters before marriage.  However, while clearly showing that this puts the children at a disadvantage, the book takes a sensitive approach to the differences between Jewish and non- Jewish societies and argues that despite their relative strictness, there is still a possibility for happiness within an orthodox marriage.

The three major relationships explored in the novel are Chani and Baruch, an engaged couple; Rivka and Chaim, a rabbi and his wife; and Avromi and Shola.  Avromi is the son of Rivka and Chaim.  At University he meets Shola, a non-Jew, and his fascination with her leads him to sin against his relgion and enter into a physical relationship with her which is close to love.  This love is tainted by Avromi’s feelings of guilt at betraying his upbringing.  He eventually ends the relationship, and when Shola comes to confront him at his home she instead encounters his mother, Rivka, who understands more about the sacrifices of love than Shola had assumed.  Where previously she had seen a tyrannical and unloving system which was willing to sacrifice individual happiness for the greater good, she comes to see that for orthodox Jews, their devotion to Ha’shem is a part of their identity and that the will of society is also the will of the individual, even if they do not know it at first.  Rivka understands this most of all, because before her marriage she was Rebecca, a young woman who came to the love of Ha’shem when she studied in Jerusalem.  Rebecca’s parents had given up their faith in the wake of the Holocaust, but her relationship with Chaim, who becomes more devout as he ages leads her into devoutness as well.  The tragedy of their relationship raises the question: does love of God mean the lessening of the love for another, or does it just make it more difficult to show?  Each character encounters this difficulty, making their personal struggles heartbreaking for the reader who is free to show love but becomes lazy in doing so.  After Rabbi Zilberman’s religious beliefs prevent him from adequately helping his wife in the face of a miscarriage, he realises that his love of his wife might be unknown to her.  A wedge is driven between them which he wishes could be undone:

“Love her, listen to her!  When she needs you, run to her.  Give to her with your whole heart, for if you’re lucky she will be more than a helpmate.  She will be your best friend.  Forget about talking too much to her!  Talk to each other all day and all night if you need to.  You must give even when you don’t feel like giving.  For this is what it means to truly love another.”

Interestingly, it is Rivka who prepares Chani for her role as Jewish wife, thus instilling in Chani the ability to be a brave and loving wife as well as fulfilling her religious duties.  Chani is as spunky as she can be, given her upbringing, and frequently shows the reader that she is just a girl at the end of the day.  Secretly, she enjoys shopping, and after a stressful trip to the ritual Mikveh to cleanse her body, she goes to purchase some sexy lingerie for her wedding night.  When a nosy Jewish woman threatens to spoil this experience, Chani brazenly flaunts her purchase, asking the woman if she thinks that her husband to be will like her in them. The underwear, Chani’s secret weapon, goes un-noticed in the face of the confusion caused by Baruch and Chani’s first sexual encounter, but when Baruch trips on the bra on his way to the bathroom, he feels hope that he and Chani will one day be more than helpmates.

The novel is written in a distant, third person voice full of passively voiced statements.  At times the entire novel reads like a summary of Jewish culture, although it gives us merely a surface view.  Stories of childhood and descriptions of religious traditions peculiar to the reader have the most energy, particularly when Chani is first submerged in the Mikveh, and when Rebecca presses her forehead against the wailing wall.   For a large portion of it, the story is character driven, written in interlocking portraits that run back and forth in time, though the novel eventually comes full circle and ends where it begins- at Chani’s wedding.  But towards the end of the book, when Chani must defeat her meddling mother in law, there is more of a plot and I believe the perseverant reader will find this section rich and rewarding.

The Marrying of Chani Kaufman is an interesting choice for the Longlist, but if it were not included, I don’t think I would have come across it, and that would have been a shame indeed.
Labels: 2013 book review ebook eve harris longlist man booker prize sandstone press simon clark the blether the long and short of it the marrying of chani kaufman