The Weaver Fish by Robert Edeson

It's been quite interesting to observe the recent branching out of Fremantle Press titles into new and perhaps more typically 'masculine' genres (although arguably there is no such real category, but that's a discussion for another day.)  Earlier in the year I reviewed Ray Glickman's Reality, a psychological thriller where a reality program is enacted on six unsuspecting Perth residents.  Today's title, The Weaver Fish, is similarly influenced by crime and thriller nuances. 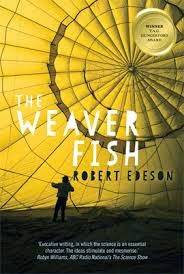 Edeson was the recipient of the 2012 TAG Hungerford Award, supported by the friends and family of the late Bill Warnock, and from 2014 the award will be sponsored by the Fremantle city council.  It is an award which seeks out fresh new writing from unpublished writers in Australia, and usually manages to unearth books which are fresh, surprising and inspiring.  The 2012 award was plagued by excellent submissions, with the result of the runner up also being given a publishing contract for later in the year, although not the prestige or the prize money.  In The Weaver Fish, judges Richard Rossiter, Susan Midalia and Delys Bird have definitely unearthed something very new.  Edeson is an expert in several disciplines, and his love of learning comes through in the text, which begins on a remote island in the Ferendes where a research station has been set up to study peculiar phenomena in language and culture relating to the deadly weaver fish which devours its prey in seconds, leaving the skeleton behind it.  The primary researcher at the station, a man named Edvard Tossenturn (this kind of pun name styling continues throughout the book) has commissioned a hot air balloon from an aeronautics company so that he can get close enough to study the fish, but both man and balloon go missing.  Anna, Edvard's 'friend' (and it's implied that she's a friend of the special kind), goes to the Ferendes to help search for Edvard and continue his work.  When an unidentified man stumbles into the research centre in need of medical attention, she hopes against hope that this might be Edvard.  Fast forward to the second major narrative of the book, which takes place in Perth, a computer genius named Richard Worse has just killed a Chinese assassin and dropped him down the elevator shaft in his home.

But how are these narratives connected, and what on Earth do they have to do with logging concerns?  You'll just have to read the book and find out.

As a novel, The Weaver Fish  is highly intelligent and complex.  I like that if you read the book as straight text, it isn't too hard for the average non-scientific person to follow on, but that for the hardcore maths and science lovers, there are deeper, scarier jokes included in footnotes, lending credence to the idea that this book is a scientific record compiled by someone named Magdalena Letterby.  However, it is this duality of author, and the double narrative, that make this book seem a little like it's having an identity crisis.  Perhaps I merely failed to understand, but the book appeared to have many unbelievable coincidences at it's heart, and particularly in the case of Richard Worse, the hand of the author was a little too visible.