We Are All Completely Beside Ourselves by Karen Joy Fowler

I love Karen Joy Fowler.  She's the perfect mix of sassy and verbose.  She's Marian Keyes meets Zadie Smith and I find all of her books entertaining and educational.  So it really wasn't a surprise to me that my gut reaction, on seeing a copy of her new book, was to snap it up and then race through what I was already reading so I could bump it WAY up my to read pile. 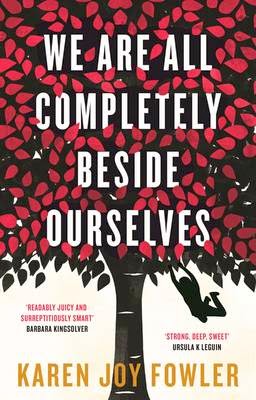 On first examination, We Are All Completely Beside Ourselves seems to be the typical American family novel set in the late nineties.  Think The Virgin Suicides- there is something dark in the family's past, but the narrator isn't going to tell you what yet.  Rosemary Cooke is 22 and studying her way through almost the entire course catalogue of Davis University, California.  She doesn't have many friends, so it is as strange to her as to everyone else when she gets arrested for throwing her lot in with a violent drama queen named Harlow.

So, Rosemary begins to tell her story, not from the beginning but from the middle.  Once, there was a little girl named Rosemary who had a sister named Fern who was the same age as her, and a brother named Lowell who was about six years older.  But then something terrible happened, and after that, Fern didn't live with them any more.  Lowell blamed Rosemary for the terrible awful, Rosemary and her big mouth, and then a few years later, Lowell ran away.  So Rosemary decided that from then on, she would keep her mouth shut.  But it's hard to make friends, and hard to find yourself if you don't talk, or even think about the things that happened to you.  Hence, book.


Except there's a twist.  A major one.  Fern was not adopted out, killed, abducted or taken away in a bizarre divorce custody arrangement.

Fern was a chimpanzee raised alongside human Rosemary to see if she could learn to be more like her, and she was sent away to a research lab.

I didn't see that coming.

From the point where this is revealed, the book becomes a manifesto on psychology and animal rights, about the structure of power in societies and about morality and ethics in research.  It is heartfelt, intense and full of insight into the human psyche.  In many ways, it is reminiscent of a Sara Gruen novel.

This book was every bit the amazing, surprising read that I expected it to be.  Very very pleased.