As the first Vogel winner in two years, Christine Piper has the weight of high expectations on her shoulders.  2013 famously saw no Vogel Award given to any entrant, judge Geordie Williamson justifying this decision on the grounds that no entry was of high enough standard to fit in with the award's terms and conditions.  Since the early 1980s, the Vogel has been a prize which searches for excellence among Australia's unpublished writers.  It was the award which gave us Tim Winton in 1982, when his book An Open Swimmer shared the award with another writer.  A few years later it gave us Kate Grenville's Lillian's Story.  And now we have After Darkness. 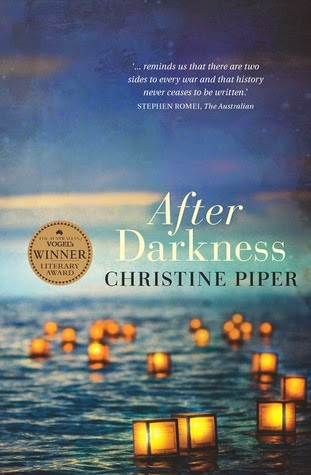 In 1942, Dr Tomakazu Ibaraki is taken from his place of work in Broome and transported to an internment camp for enemy aliens at Lovedale, South Australia.  In Lovedale camp, Ibaraki-sensei's loyalty will be tested- as will his trust in authority and his sense of discretion.  It is Ibaraki's discretion which defines him, but as the novel progresses we see what it has cost him, also.

After Darkness is not a long novel, nor a complicated one but it shows a depth that speaks of a true understanding of subject matter.  A lot of research has clearly gone into this project, but the author is also emotionally invested and strikes a neat balance between fact, exposition and action.  This makes the novel flow; reading one chapter becomes reading two, which soon leads to effortlessly reading the whole book in a single sitting.  While the subject matter is often sinister and dark, the voice of Ibaraki-sensei allows the reader critical distance from the material.  We see, then we feel, what Ibaraki is going through, but though he is struggling, he is not doing so overdramatically.  This is a difficult book to analyse without giving away spoilers, but through interspersed scenes set in the present day of 1942 and the years leading up to the war, Piper expands on themes of morality, loyalty, nationalism, mateship, displacement, family, love, duty, and spirituality in the face of a changing twentieth century.  This is no small achievement, given that the book is barely 300 pages long!

There is also some joy in the book; in the blossoming but forbidden attraction between Ibaraki and his ward sister, Sister Bernice; in the baseball tournament played by the men in the camps; in the scenes of homemaking that Ibaraki-sensei shares with his wife.  This is a book which understands the edict that "The shadow proves the sunshine."

I have not given a five star rating in a while, but I feel this remarkable book deserves one.