It's really easy to create a protagonist who you can love.  After all, they are often the germ for the story.  J.K. Rowling is often quoted as saying that Harry Potter just walked into her brain one day, fully formed, while she was minding her own business on the train.  And your protagonist is fun to think up interior lives for, to flesh out and make real.  This is very important because if your reader doesn't give a hoot about your main character, you can assume a fair chance of them not finishing the book.

The book that I am working on right now features two villains.

The first is a forty seven year old man named Robert Willis who owns a successful cigarette factory (or two, or three, depending on where you're up to).  I have always imagined him looking a little like the man who plays the boss in television's Monk. 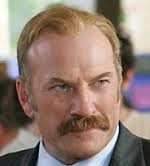 Robert was a fairly intuitive character for me to write because he is the antithesis of my protagonist's hopes and desires.  In subsequent drafts, because I had the bare bones of him, I was able to flesh him out further and explore in more detail why he is such a negative person.

This evening when I sat down to write, I decided it was time to give a bit more depth to my other villain, who only appears in part four of the book.  This part takes place on the Thai Burma Railway, and this character, who I've called Nakamura, carries the burden of representing the fearsome force that was the Japanese Imperial Army in the eyes of the Australian soldiers taken prisoner in Singapore.  I realised, as I sat down to write out his motivation a little more that I had no idea why he was in the army, what his spiritual beliefs were (which is important because he plays a key role in the plot because of something he does for spiritual reasons)... I hadn't even given him a first name!!!!

During tonight's writing session, instead of doing my usual 1000 words, I spent a bit of time with Nakamura and got to know him.  I gave him a first name, (Hiroshi, meaning generous), and an age, 32.  I decided he was a major, and a career military man.  His father was a veteran of the Russo Japanese war of 1905, and his brother Haruki had been killed during conflict in China in 1938.  At one point in time, around about the time my protagonist Winston was beginning his story (1937), Hiroshi Nakamura was growing tired of the military life and considered retiring from active service to become a high school teacher.  This changed when his brother was killed.  Nakamura becomes easily exasperated when he feels he is not being listened to, and his history in the army has developed in him a tendency to solve his problems with force.  He is a Buddhist.  His parents are still alive.  He is from Shinjuku, Tokyo, and University educated in civics and history.

He is nothing like the images of the Japanese enemy Winston would have encountered. 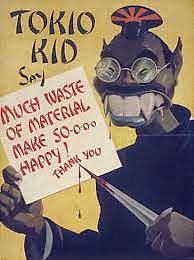 After doing this exercise, I now feel more equipped to go forth into the turning point of part 4, and write a more gripping twist in the tale!

Tried something similar?  Let me know in the comments.
Labels: between the sleepers character history japan japanese literature the compound writing writing exercises