In the mid-1990s, Joanna Rakoff was an aspiring poet and recent arts graduate with very little idea about what direction to take in her life.  (A familiar position for some of us, perhaps?  Anyone nodding out there?)  Through serendipity, and a little bit of help from her friends, she lands herself a job at The Agency, one of New York's most well known literary firms.  The Agency's hallowed halls are lined with books by the likes of Judy Blume, all represented by legendary agents of days gone by, such as Dorothy, Claire, and the woman Joanna has come to work for, referred to only as 'my boss'.  But by 1996, the industry has already begun to change rapidly, and as the newcomer, Joanna watches and learns as the younger, more innovative agents begin to surpass her typewriter and dictaphone loving boss, entering the world of multiple submissions, rights auctions, and contracts involving electronic rights despite no one actually having gone so far as having used these yet.  Joanna enters this world somewhat naively, just wanting a job so that she can pay the rent on her slightly overpriced and under constructed apartment, and write poetry in her spare time.  She visualises a job where she will spend her days reading manuscripts and being a part of the process of making a young or first time writer's dream come true.

Instead, she spends her time typing up letters.

Specifically, she spends her days typing form letters to fans of JD Salinger who write in to the agency trying to get in touch with this man.  The letters speak of a longing to be understood, and a sense gained from reading Franny and Zooey and Catcher in the Rye that only Salinger would understand.  Touched by the emotion in these letters, Joanna lets them into her head, and the works of Salinger into her heart, trying to see what they see. 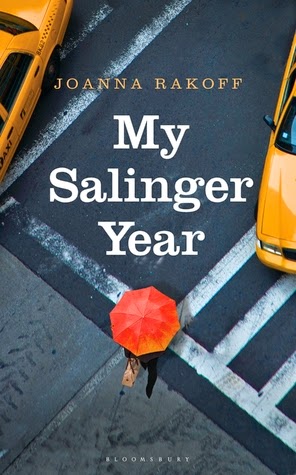 Described as The Devil Wears Prada meets Mad Men and Girls, My Salinger Year is a face paced and often funny memoir which will resonate with anyone who remembers dipping their toe in the deep end for the first time.  Joanna must balance her professional life with her personal life and this doesn't always work out so great.  Unlike in The Devil Wears Prada, where Andy must grapple with her own changing priorities and the numerous side effects they have on her friendships with friends already settled in professional jobs, Joanna struggles to keep her friendships with women who are in the same position as her- newly graduated, moving into serious relationships, and moving to different states.  She also has to deal with her boyfriend Don's obvious unsuitability, although at times one thinks he can't surely be as much of a slug as we are made to think.  A self professed communist or something like that, Don is selfish and childish, and expects Joanna to look after him.  He decides that they are dating and Joanna goes along with it, a symptom of her failing self-esteem and feelings of... what?  unworthiness?... with regards to an idealised college boyfriend for whom she still harbours serious feelings.  Or perhaps it's a fear of commitment.  Whatever the reason, Joanna's relationship with Don appears parasitic right from the moment when Don announces that the apartment will be leased in Joanna's name, seeing as Don has bad credit from not paying his student loans.  He also doesn't have a steady job.  He seems to spend all his time writing his sexist, misogynistic rape/pornography revenge novel about an ex girlfriend he surely made up, and skiving off his responsibilities around the house.  His friends are all dilettantes like him, some of them washed up ex-Upper East Side darlings with drug problems.

The ending of the novel is particularly well executed.  Joanna's success in becoming An Agency Type Of Person proves to her that she can make it on her own if she tries, and so she quits to write her poetry, stating as a reason that if she doesn't do it now, she never will.  This is done in an understated and well-paced fashion, coming at just the right moment so as not to feel trite or like the After School Special package deal forced on the story by someone else.

I read this novel in a single afternoon, laughing out loud and frequently interrupting the reading of others to read parts I loved aloud to them.  This is high praise.  I think this book is great reading, but it would also make a great gift for the graduate in your life.

PPS but Salinger is pretty brilliant so you should read some anyway.
Labels: bloomsbury book review catcher in the rye franny and zooey joanna rakoff literary memoir memoir my salinger year salinger