In a small town called Baalboorlie, up north in Western Australia, The Old Man (a decorated war veteran and Aboriginal elder) perishes in the back of a prison transport van on a sweltering hot day.  The repercussions of this event will blow the town out of the water.

Sweet One, The Old Man's grandson, is informed about the death and returns home to exact justice on those involved-- with payment in kind.  As the body count rises, a journalist from Queensland named Izzy Langbourn realises that this is about more than just a story.  This is about the Truth. 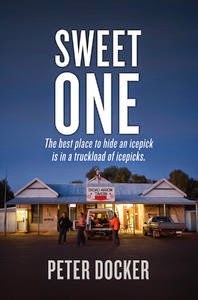 Part literary condemnation of the fate of Aboriginal and non white prisoners in the Australian justice system, and part crime thriller, Docker's new novel fits into a genre with other rural Australian crime writers-- Robert Schofield, Alan Carter and the like.  The book mixes a strong small town flavour with the thrills and spills of a big city manhunt, and spares nothing on the gore factor.  Each murder committed by Sweet One is gorier than the last, but my personal favourite is the two GLP4 guards responsible for prisoner transport who are locked in a boiling sauna overnight with only a plastic bottle of water and a frozen pie.

While the setting and the incident that begins the novel are thinly disguised versions of things that truly happened, this novel goes far beyond reality in a kind of cautionary tale meets Saturday night prime time movie thriller.  Baalboorlie is Kalgoorlie, and one wonders if the reference to the Egyptian god Baal is significant.  The death in custody of an Aboriginal elder in the back of a hot transport van; that is based in fact, and Docker's treatment of the scene surrounding it, though clearly coming down against the authorities, is well thought out and empathetic.  The men who work at the Baalboorlie and Somerset police stations and at GPL4 are not evil themselves, but products of a flawed system that only creates more problems.

Another major theme of the novel is the long term psychological effects of active service on Australian soldiers.  Izzy's partner Josh is in Iraq, and she's been there herself.  It has deep ramifications on their relationship, but nothing quite so bad as the mental issues faced by Sweet One, Mort, and the other returned soldiers at the heart of the violence in this book.  At times, the action in this novel is somewhat obscured by the complexity of the conspiracies at work here.  I'm still not one hundred per cent sure who was on what side.  Blackmail and backstabbing have characters crossing the floor all over the plot, but a fast pace and a strong lead character (Izzy) keeps those pages turning.

Izzy is a character whose point of view goes through a drastic arc of change because of the events of the novel, but in a believable way.  Her beliefs are tested, and her allegiances.  Yet at times, she behaves in a way that seems unnatural and almost masculine.  After finding out that her partner, Josh, has been killed, she immediately responds to a callous invitation to have sex in the front of a car with a man she barely knows.  While her quest for physical solace is not unheard of, particularly in dramatic storytelling, she seems almost predatory in her actions, somehow male.  At the rest of times, it is easy to believe that she is a strong woman.

This book is definitely not the kind of thing I would have picked out for myself, but it was a great read.  I gave it four stars.
Labels: book review fremantle press peter docker sweet one western Australia western australian writing review