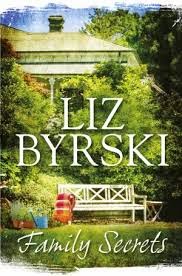 Western Australian writer Liz Byrski follows on from her previous best sellers with another novel of family and friendship, the themes on which she writes so well.  Family Secrets begins in Tasmania, as the Hawkins family gather to scatter the ashes of their father and husband, Gerald.  Gerald has passed away after a long battle with moto-neuron disease, and the family can finally concentrate on getting their lives back on track now that the burden of his care is over.  But it's harder than they think.  His wife, Connie travels to France to stay with Gerald's estranged sister, bemoaning the artistic life she gave up when she married Gerald.  Meanwhile, Flora has her own unfinished business with him; a lingering sense of her own low self worth impressed upon her by her brother's strong opinion about her sexual orientation that has left her drifting and unable to put down roots.  His son Andrew realises with a shock that he's not been the best husband or father when his wife begins an affair with a surprising choice of man.  And daughter, Kerry avoids the D word (Depression) as a possible cause for her apathy and low moods.  Family bands together to sort out the tangles that come with modern living in this charming story.

Once again, Byrski has brought sensitivity and lightness to her depiction of the Australian family.  Her characters are lifelike, each with strong opinions of their own, and the book is full of examples of these opinions coming into conflict with each other, right from the beginning when Andrew and Kerry argue over where Connie will live now her husband is gone.  Far from the doddering old lady they make her out to be, Connie is still full of life and spunkiness (this reinvigoration of the 'old person' stereotype a common motif in Byrski's work) and she silences them all by making her own decisions to go away for a holiday.  At times, the dialogue of these arguments is loaded with an agenda that is somewhat too explicit for my likings, but it gets the job done.

Like a soap opera, the plot of the novel just keeps throwing challenges at the Hawkins family.  For example, Andrew finds out his wife is cheating on him PLUS his wife throws him out while he's away and lets the disgusting specimen she's sleeping with move in PLUS he finds out the man is cheating on her, using drugs and trashing her house PLUS he's in a bike accident and ends up with pieces of smart-phone embedded in his bottom.  This sort of building of misery is consistent to all of the plots and subplots in the novel, no matter which character is being followed and it makes for a compelling read, but at times it is just a little bit too much.  Without giving away any more spoilers, some of the more major revelations in Connie's life with both predictable and possibly unnecessary to a satisfying resolution of the novel.  However, Byrski has the skill to make these things work within the scheme of her writing, whereas a lesser writer would have bungled them completely.  Within the context of the genre, they make perfect sense, and perhaps it is just that this genre is never my first choice.

The settings of the novel are beautifully realised and brimming with nature, most notably the seaside in Port d'Espirit where so many of Connie and Flora's childhood summers are remembered.  As Flora rides her bike through the town, I can picture life there, and smell the fresh bread.  The world of the story is fully realised in every part of this novel, with no scenes floating out in space.

But most impressive of all is the character of Brooke, who is likeable and realistic and serves as a catalyst for many of the realisations made by the adult characters in the book.  As a device, teenage Brooke ties the disparate adult characters together using technology and insight, and causes them to question their secret keeping and the result it has on their selves.  Brooke is a character who is friendless and likes to be that way, and I instantly liked her despite her outward moody teenager facade.  When she stands up to bitchy Donna, I cheered inside.

I gave this book 3.5 stars but if you're a huge fan of family dramas you'd probably give it 5.