Anyone who has subscription television in Australia has probably found themselves watching trailers for the new series 'Outlander' at least once a day.  'Outlander' is based on a series of novels written by the American writer Diana Gabaldon which centre around a young woman from 1946 who stumbles through a rock formation and is transported to the Scottish Highlands in 1743, amidst the turmoil surrounding the legitimacy of the English King George's claim to the Scottish throne.  The young woman, Claire, is the wife of Frank Randall, the six times great-grandson of Jonathon 'Black Jack' Randall, an English corporal on patrol in Scotland.

In Australia, the first book in the Outlander series is called Cross Stitch, a title which doesn't make much sense at all.  It's an 800+ page tome, beginning with Claire and Frank on their honeymoon in Inverness (I think...), where Frank spends his time researching his ancestor, Black Jack, and Claire alternates between learning about the healing properties of local plants, being bored out of her mind, or enjoying the presence of her new husband.  It's important to note that Claire and Frank were married before the war, but were separated by duty during it, and are only just reunited for their honeymoon at the beginning of the book.  Claire was a nurse, and knows a lot about battlefield healing, which comes in handy when she travels back in time. 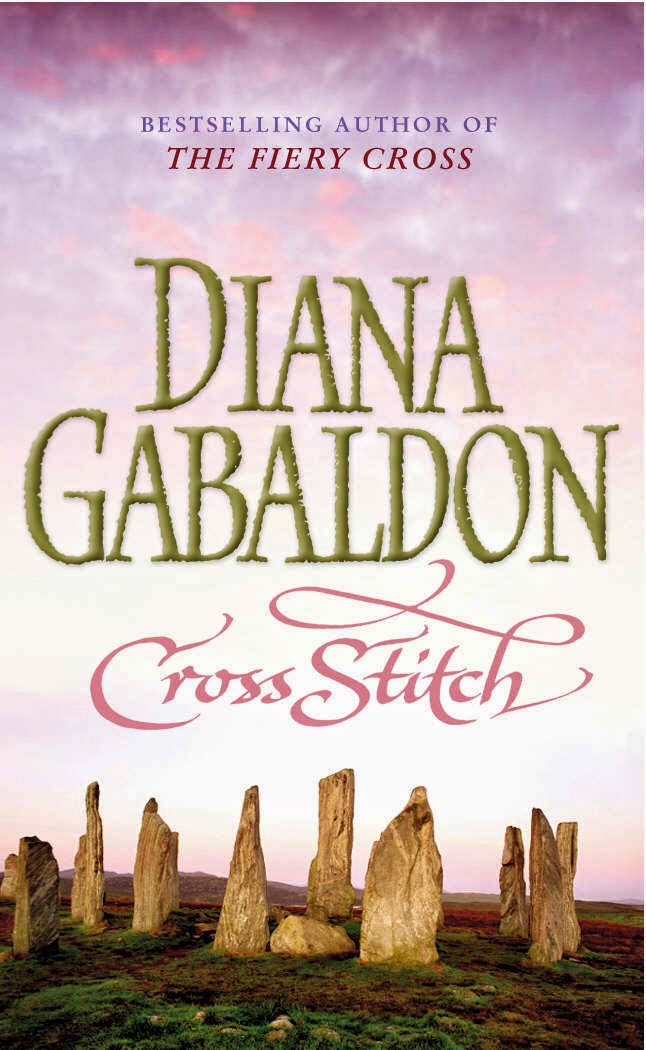 In the highlands, Claire is at first discovered by Black Jack Randall, who is the spitting image of Frank but is cruel and tries to rape her.  She is rescued by Dougal MacKenzie and his men, who claim her as a hostage.  Each side thinks Claire may be a spy for the other.  They take her back to their camp, where she first meets Jamie, a young man who has just returned from France.  Jamie has a wounded shoulder, which Claire tends to, earning a begrudging trust from the men.  She cements her right to travel with them by predicting an ambush by the English, allowing the group to pass through largely unscathed, although Jamie strains his injured shoulder, for which Claire chides him- this is a hallmark of their relationship for the rest of the book.

Claire is taken back to Castle Leoch, held by Dougal's brother Callum MacKenzie, who cannot lead battle because of his cripple legs.  Claire identifies his ailment as Toulouse-Latrec Syndrome, a malady which will not be named for another 150 years.  She is set up as a castle healer, and later taken out on a pilgrimmage to collect the local rents with Jamie and Dougal, and a lawyer named Ned.  In order to stop Claire, as an Englishwoman, being handed over to Randall and his soliders, Claire and Jamie are forced to wed one another, but Jamie surprises Claire by being a tender husband, albeit an old fashioned one.  From then on, their fates are bound to one another, and Claire's determination to go home is complicated by a growing love for Jamie and her guilt over having abandoned Frank, however unwillingly.  There are many other twists and turns along the way (there would have to be in 800+ pages) and the result is an exciting novel with much swordplay, a highly detestable villain, and many scenes of passion.  (In fact, I would say too many... we get it... they lust after each other.)  What saves the book from being a bodice ripper that you would buy at an airport is the immense effort that has gone into researching this book.  The historical period comes alive, and Gabaldon shows a clear understanding of the anachronisms between the 1700s, the 1940s and our own time.  Claire is a likable and consistent heroine with her own aims, who does not ALWAYS need to be rescued by men (although sometimes she does) and uses her ingenuity to get by in a time 200 years before her own birth.  While Claire does worry about the consequences her appearance in the past might have on the present, the book does not spend too much time worrying about the butterfly effect, which leaves the willing reader free to get caught up in the swashbuckling fun of the times.  This will most likely translate extremely well to television.

The book probably could have done with some more structural editing before the end, because in terms of traditional structure, there did seem to be a climax, a resolution, and then another narrative arc tacked on the end... it might have been better as two books, and it will be interesting to see how these arcs are handled in the series. 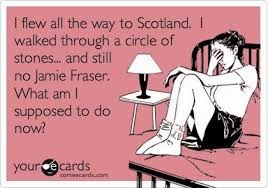 It is also interesting to think that the events of these novels happen only a generation before the events of Jane Austen's Pride and Prejudice, but the time seems a lot more fraught with danger than Austen's novel leads us to think.

If you're looking for a great fun read, I do recommend Cross Stitch/ Outlander, and I will definitely be checking out the TV show when it starts this week.
Labels: book review book to tv claire beauchamp claire randall cross stitch diana gabaldon historical fiction jamie fraser outlander outlander tv series soho