The Rosie Effect by Graeme Simsion

Hard to believe it was two years ago that Don Tillman first came into our lives.  The Rosie Project was just what the reading public was looking for: funny, romantic, realistic, it was a book that had something for everyone.  While it followed the standard romantic comedy formula (and therefore, we could predict that Don would get the girl in the end), it deviated just enough from the familiar patterns for the book to be doing something new.  To make odious comparisons, it was Big Bang Theory meets The Forty Year old Virgin meets a Marian Keyes novel.  It was a bookseller's dream come true.  (Unless of course you ran out of stock.)

Two years on, that book is still going strong, but it is about to be joined by a new volume; The Rosie Effect is the story of what comes after our intrepid professor's happily ever after, and begins, like its predecessor, with a culinary mishap. 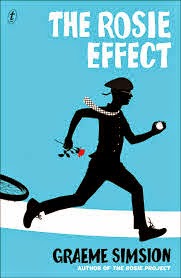 What is so loveable about Don's antics is that he is the most unreliable of narrators.  While the reader can plainly tell, for example, that Rosie is drinking orange juice instead of wine because she is pregnant, Don is baffled.  His bumbling gets him into trouble at times... say, at the children's playground or at dinner with someone who objects to the restaurant serving unsustainable seafood... but Don's moral compass is true, and once again, his innate selflessness makes him endearing despite his annoying tendencies.

Rosie has less spunk than in her previous appearance, but rightly so... she's under considerable pressure, trying to finish a PhD and a medical degree concurrently over the summer break, and she's just found out she's pregnant.  Add to this Don's unconventional approach to fatherhood; research.  Instead of showing his excitement for the arrival of BUD (Baby Under Development), Don begins to make himself an expert at all things pregnancy, from nutrition and exercise to the actual delivery of the baby.  This doesn't sit so well with Rosie, who wants to learn to be a good mother her own way.  Nor does it sit will with her that Don has invited his old buddy (and her thesis supervisor) Gene to stay with them, since Gene's wife Claudia has thrown him out for cheating.  And since Don and Rosie are living in New York, that means Gene's going to be spending a bit of time with them.  A lot actually.

Bizarrely, Don manages to finagle a rent-free living arrangement involving babysitting a rock star's beer fridge (strange, and yet somehow it works... but only in New York), which leads to the madcap fun associated with Don setting up his office in a bathroom, with the toilet as a desk chair, as well as the manufacturing of a soundproofed baby cradle with breathable air (imported, of course, from South Korea and modified by Don's father.)  He also gets himself appointed to a psychological study of the effects of the parent's gender in oxytocin levels of infants... allowing him to spend time with babies in preparation for his own child's arrival.

But as things get more complicated, in ways only Don could manage, it seems more and more likely that Don won't actually get to play father to Bud.  In fact, he's just not average enough.  As his relationship with Rosie grows more and more tenuous, Don begins to believe himself that he's not right for her, and he gets ready to let her go.

The strength of this book is in Don's journey.  For much of the novel's climax, I truly believed that Simsion was actually going to do it, have Don go through two books only to LOSE Rosie for good.  My heart was in my mouth.  The conclusion had tears in my eyes.  I never thought I would cry in a Don Tillman book, but there you go!  This is a much stronger book than The Rosie Project.  Simsion's writing is effortless, his humour is less laboured, and the Asperger's question is less pronounced, although once again it is swiftly dismissed in a conversation early in the book.  What this book does really well is identify just why life is a lot more complicated than it seems in romantic comedies.  Plus, it also reunites the reader with a beloved character.

I would have liked to have seen more of Rosie, but that's just me.