The Minnow won the 2014 Text Prize, an award which seeks the best in unpublished writing for Young Adults.  Previous winners include the ever-talented AJ Betts, whose novel Zac and Mia sold like gangbusters at this year's Brisbane Writers Festival.  In The Minnow we join 14 year old Tom (Tomboy/ Holly) who is sleeping rough after the infamous Mothers Day flood killed her family along with half the town.  Her only surviving relative is Nana, but as Nana is in a nursing home, Tom lives in the boatshed with Bill, a man who used to pal around with her father.  Bill is a bushman Lothario of sorts, and he and Tom finance their fishing by shoplifting; an arrangement in which Bill distracts the shopkeeper by having sex with her in 'ingenious' ways so that no other customers will notice, and Tom pockets the things they need.  Bizarrely, the shopkeeper seems to be aware of what is happening but seems to greatly dislike her husband so much that she turns a blind eye.  Everything changes the day that Bill realises that Tom is actually a girl, and they sleep together.  Tom becomes pregnant with the Minnow, with whom she is able to converse.  The Minnow is insightful and sometimes prescient, and is not the only weird thing that Tom sees or hears.  She also speaks to fish, and sometimes hears them reply in the voices of her dead relatives, and she can speak to the ghost of her grandfather, a man she never met. 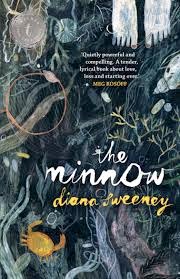 As Tom tries to negotiate the pitfalls of being a homeless, pregnant teen in a small town, things are made more complicated by the disappearance of Bill and the subsequent attempts by local law enforcement to question her.  Tom, now living with her best friend Jonah, seems to cope fairly easily with the pregnancy, despite a few medical scares, and the question of what Bill is really up to seems to drag the narrative along... but then is never really answered.  But that's not the point of the story.  This is a story about moving on.  Becoming pregnant, and talking through what is going on with her Minnow, allows Tom to step out of the suspended animation that she seems to have been living in since the flood.  She is forced to re-enter her life- go back to school, talk to her old friends, accept that her Nana is getting older.  It is a story about how we move on from great tragedy, and despite it being incredibly strange and sometimes a little too out there, this is a book that intelligent teenagers are really going to enjoy.  It has echoes of Friday Brown by Vikki Wakefield, another Text publication, and at times reminds me of the clarity of voice in John Marsden books.

It's a short read, but a worthwhile one that I would recommend for readers 14+
Labels: aj betts amanda betts australian book review diana sweeney text prize text publishing the minnow young adult zac and mia