How to make friends at college, according to Penelope's mother:  Don't be too enthusiastic, don't talk to people who seem to be getting annoyed, and for heaven's sake stop playing tetris on your phone at parties."  All good advice, but it doesn't seem to help Penelope much, as from the moment she arrives at Harvard, it seems as if she's doomed not to fit in.  From her attraction to pretentious German men in wrinkled suits to her obsession with bringing up the infamous car seat story (she sat in one until she was in grade four, and she thinks this makes her interesting), Penelope is not 'normal'.  She is in fact rather extraordinary.  How she manages to pass college, or indeed if she does at all, is not dealt with, because Penelope's loneliness seems to stem primarily from her lack of urgency when it comes to studying for college exams and assignments.  From the outside perspective, the reader is shown the hectic, often extremely inauthentic world of college dorms, where people never say what they mean, or if they do, it's completely unbelievable to the normal human ear.  And yet, to everyone there, it is normal to go to Med School talks if you're not a Med Student, and normal to kiss ass to get into elite clubs for rich people, and normal to drop out of a play near the end of rehearsals because you have far too much work to do.  (Although fair enough, the play was Caligula and the director was INSANE.)

Penelope is a quirky, funny book that is reminiscent of the later seasons of Gilmore Girls.  Many readers on Goodreads seem to have found the heroine annoying, but aside from her consistent repetition of the car seat thing, I actually liked her.  She was weird in an endearing way, probably trained to be that way through habitual social estrangement, and an excellent pair of eyes through which to laugh at the Ivy League world.  From the hilariously corny Teacher's Assistants to the stupidly named rich kids who used one another horribly, to Penelope's anarchist roommate Lan and her stray cat Raymond (my favourites), this book probably could happen in real life, and it probably could happen to you.  I loved it. 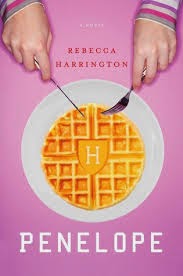