Book Review: The Signature of All Things

Most of us are familiar with Elizabeth Gilbert for her memoir Eat Pray Love which was alternatively raved about and complained about by people all over the English speaking world for being so "innovative."  It was basically the story of Elizabeth's quest to find herself in the wake of a messy divorce, and this spiritual journey involved eating a lot of pasta, praying and meditating, and then falling in love again.  I read it, and there were parts that I really enjoyed, but I didn't find it as life changing as the chatter around me seemed to indicate I would, and I now fall into the camp of Eat Pray Love bashers who equate the reading of that book with reading Twilight unironically.  Still, I have to remember that book-snobbery serves no one but my own ego, and any book that gets people to read is a good book at least in that small way. 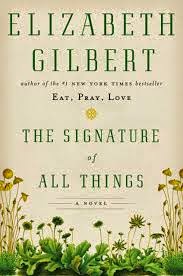 The Signature of All Things is not a travel memoir or a spiritual memoir, but in fact a rather weighty historical novel about a woman named Alma Whittaker who is a botanist living in Charles Darwin's times, ie the early 1800s.  Early reviews praised the book's portrayal of a female protagonist in a historical novel who is plain and knows it.  I find this somewhat of an understatement.  Alma is a female character who is out of place in the time period which she has been born into for several reasons.  First there is her unusual plain looks.  Historical novels are usually about shockingly beautiful women.  Then there is Alma's scientific mind.  She frequently challenges the male visitors to her father's home in a very unladylike manner.  And then there is Alma's sexuality.  Suffice to say it is pronounced.  So much so that it almost feels as if Alma's frequent trips to the binding closet in the library to explore herself have been put in to force home a point.  Alma could be said to be a very early feminist, and indeed in many if not all ways, she is not the typical woman of her time at all.  Yet at times, this does nothing for the plot of the book.  Large chunks of the story are spent on describing the unusual things about Alma, but they then do not lead anywhere.  There are two conflicting plotlines at work in this book.  One: Alma's quest to be a botanist and a scientist, in which she works almost parallel to Darwin; and Two: Alma's 'struggle' as an ugly, unfeminine woman in a world where women need to be pretty and innocent in order to get by on the arm of a man.  These plots work fine on their own, and could have worked fine intertwined with one another had the balance been correct.

One strength of the book was characterisation.  The people of this book were vivid and consistent, and some of them were particularly entertaining, such as Alma's father Henry and her Dutch nurse, Hanneke de Groot.  Others were appropriately dull, such as Alma's first love interest.  The curious interplay between Alma and her adopted sister Prudence intrigued me the most, as I believe the relationship between sisters to be one of the toughest to get right.  These two girls were close out of proximity but distant due to differences in their personalities, and despite all this, there was an almost hidden undercurrent of loyalty between them.  In the scenes during which Prudence and Alma become friends with Retta Snow, they are united by their common friendship with this bubbly, pushy figure who reminded me of a feminine, ditzy Pippi Longstockings.  And then as they walk home again without her, they are once more divided by their... what?  competition for their parent's attention?  I cannot be sure how it was done, but that at least was done well.

This was a readable book, and the prose was at times rather beautiful, but I failed to find any satisfaction in the ending because there was no sense of inevitability about it, and by that point I had stopped caring what happened to Alma.  A shame, because such a well-researched book, if better written, could have changed my mind about Gilbert.  As it is, I remain on the fence.

Two and a half stars.
Labels: book review botany elizabeth gilbert historical fiction strange women the signature of all things