When I see a book that looks like this one, my heart goes pitter patter.  I know I'm in for a breathless, romantic, historical read.  That, or bitter disappointment.  Thankfully, this time it was the former. 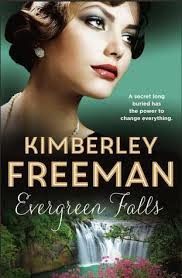 Evergreen Falls is the story of Lauren, a thirty-something year old woman who moves to the Evergreen Falls development site after her older brother Adam loses his battle with a respiratory illness which had him bedridden for the last years of his life. Lauren's life has been put on hold while Adam was unwell (largely thanks to a modern-Mrs Bennett without the social climbing who calls herself Lauren's mother), and so she decides to move to the last place where Adam was happy, the Falls.  It was once the site of a health spa for the rich and famous, and it is being redeveloped by a team of architects for modern living.  Among them is Tomas, to whom Lauren is very attracted.  (Interestingly, Lauren is a virgin, which I found refreshing and also realistic, because the modern 'spinster' character is increasingly rare, and when a fictional woman bemoans her lack of dating experience, it's often an exaggeration.  Lauren's adolescence has been ruled by her mother, who has not let her do much at all, in order to keep her safe, and her sheltered life feels very real.)  The mystery begins when Tomas (who is sexy and Danish) leaves a key on a table in the coffee shop where Lauren works, and she takes it, intending to return it.  But not without looking around the deserted wing of the old hotel, to which the key belongs.  In the wing, she stumbles upon a bundle of racy letters, from a man named SHB to a woman named Violet, and her quest for the story behind them begins.

This novel follows a parallel structure, with a plot in the modern time period, and a plot in the past which the modern characters must piece together.  The experience of learning about the past helps Lauren and Tomas to grow, and find love and friendship, but unlike in other such historical novels, it is not the sole focus of the modern section.  The solving of the mystery is one part of the plot in 2014, but Lauren is also searching for some truths about her brother.  As Adam became sick when she was quite young, she discovers she never knew Adam the man, and goes searching for people who might have known him.  In the process, she must also discover who she is.  The book has strong, fascinating themes, such as the child's discovery that their parent is not perfect, the quest for the perfect love, the loss of innocence, and the surprising consequences of things not going as planned.  The setting was clear and beautifully realised, as well as unique, particular in the 1926 parts where the hotel is snowed in for a number of days.  It is easy to picture the snow covered mountain, the trees, and the freezing, sparkling waterfall.

One thing that I thought was going to be a criticism, but turned out to be a huge strength of the novel was the characterisation of Sam, the SHB of the letters.  Samuel Honeychurch-Black is an opium addict, and a spoilt young rich man who has a sensitive soul.  He falls in love often, and rarely thinks about the consequences of his actions, and he and Violet fall for one another almost instantly, much to the chagrin of his sister Flora who is supposed to be curing him of his addiction.  She bans the romance, but it blossoms anyway, and Sam calls Violet to his room at all hours of the night, takes her virginity and often asks her to do sexual acts which seem exotic, and at first frightening to Violet (don't worry, it doesn't go into a LOT of detail in these sections, but I would recommend that this is not a book for younger readers, or those who object to this sort of detail.)  When Violet begins to be tired from her work as a maid at the spa, she stops coming to his room as night, but Sam grows petulant like a child and says this is evidence she doesn't love him.  He talks of romance, but never gives her a straight answer about marriage.  In short, he manipulates Violet, and at times behaves a little like a predator.  I found him incredibly creepy!  Yet it worked in the context of the novel.  The reader sees what is happening to Violet, but they also see she is totally taken in by it, and that she's caught in the magic, totally out of her depth.  They also see safe, constant Clive, who isn't the man to swoon over, but he's always there, and the two men make near perfect opposite sides to the coin.  When Violet begins to get out of her depth, it is interesting to see the different ways these men come to her rescue.

There was so much to love about this novel, and I think that had I not been told about this story I never would have picked it up.  If you're looking for a Christmas gift for someone who loves history, Pride and Prejudice and the novels of Kate Morton, this would be an ideal gift.
Labels: australian author book review evergreen falls hachette australia historical fiction kimberley freeman romance the 1920s