The pre-teen bookworm in me rejoiced when a copy of John Marsden's first book for adults was pressed into my hands.  South of Darkness tells the story of Barnaby Fletch, in his own words, as he recounts the experiences of his life: from starving orphan in "Hell", the downtown streets of London, to the convict settlements of New South Wales.  Barnaby's voice is warm, intelligent, and surprisingly literate for someone of his station, although the narrator continually hints at a rise in his position.  A modern take on the Dickensian world, this story is realistic, exciting and thoroughly compelling, and I enjoyed it immensely. 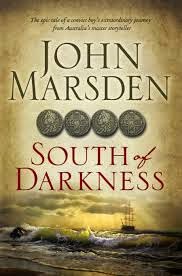 It begins with Barnaby telling the reader of his first memories.  His parents are absent and he does not remember them, nor does he know precisely how old he is.  The dirtiest part of London, where he lives, is known to the inhabitants as 'Hell' and here he teams up with Quentin, a boy about his own age who is plagued by the superstitions surrounding a birthmark which covers part of his face.  People think that Quentin's face is a sign of the devil, and his parents abandon him because of it. Barnaby and Quentin make their way in the world by thieving food and pick-pocketing, and in one instance they enter a house when an opportunity presents itself, and proceed to steal the entire meal laid out within.  This experience earns Barnaby the thrashing of his life, which he bears gladly to help his friend escape, and he is repaid by Quentin's kindness in taking care of him.  The boys' lives are a series of bumblings and mishaps that occur as the results of their trying to make their way in a harsh world, from the near drowning of Barnaby after a fight to the unfortunate theft of some counterfeit notes from a drunk which land Barnaby in hot water with the dealer he sells them to.  Despite his pilfering and sneaking, Barnaby is a good hearted character who just wants to survive in the life he has been dealt.

Barnaby takes refuge occasionally in the local church, where he finds places to sleep.  Quentin is too scared to follow him in.  In the church, Barnaby listens to the sermons and is particularly taken with the story of Job, and the horrible ways in which his faith in God was tested.  Barnaby endeavours to be faithful in the face of tragedy, like Job, in the hopes that he will someday be rewarded with the fulfilment of his faith.  This is a major theme in the novel, and yet it is not an overtly religious theme, despite the method of delivery.  Rather, it is a lesson in goodness and persistence, and in integrity.  There are a number of Reverends who work at the church Barnaby frequents, and while two of them are disliked, one, Reverend Johnson is a beacon of inspiration to Barnaby.  The decision to include the religious motif to the story added a layer of versimilitude that I think the book would have been diminished without.  It provided a pathway into the 18th Century mindset for this 21st Century reader.

But the book's most memorable passages were those which recounted scenes of horror- of the trial at which Barnaby must face rape charges falsely levelled at him by his employer, his experience in the infamous prison at Newgate, on board the ship when he is transported, and finally when he is exiled from the penal colony for helping an escapee.  Marsden does not shy from the gory or the improper, instead giving Barnaby his reign to convey his own thoughts on each matter, whether they be resignation, disgust, or pain.  A fine balance is struck in the delivery of these, and the reader is not overwhelmed by distaste.  In fact, it is these scenes of conflict, often taking part during major plot points, which drive the novel forward, as it does not have a typical plot structure.  Instead, the book follows Barnaby's life with no emphasis on climax and resolution, again following with a book style from a much earlier time.  There is even some suggestion in the book's closing, that this story might only be the beginning of the life of Barnaby Fletch.  I certainly hope that this is the case, and I would read a sequel easily.

The book's satisfying conclusion came from the use of two believable coincidences, but to tell you what would be to spoil them, so I will leave you with the recommendation that you read South of Darkness for yourself and find out.