When reformed drug addict turned priest, Peter Leigh, embarks on a long journey to the new interplanetary colony known as Oasis to serve as a spiritual advisor for the native population, he expects he will be home in a few months.  He leaves behind his wife Beatrice, and his cat, Joshua, and travels via space ship to the USIC base that will serve as his home.  But USIC, a governmental body shrouded in mystery, is far more alien to Peter than his new congregation, and while the Oasans are willing to receive the word of God, Peter's mission grows harder as he learns of the terrible disintegration of life back on Earth. Most alarmingly, his relationship with Beatrice is not faring as well through the separation as he'd hoped.

Told from the point of view of Peter, with several "Shoots" (a kind of email) from both Peter and Beatrice, this novel represents an interesting challenge-- that of explaining the things we take for granted in our day to day lives to an alien population who have not only no context for them, but also limited language in which to have them explained.  Religion, as a framework, provides context that can be common to both the humans and the Oasans, and thankfully for this atheist, it is used in such a way as to not exclude a reader with little to no understanding of the Bible or any of its stories.  I found the book quite hard to get into at first, but I think that was because December is a notoriously busy month.  By Christmas Day, I was wrapped up in it well and truly. 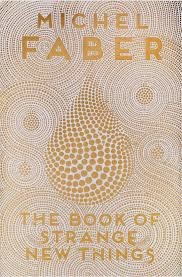 As the story progresses, Peter becomes further and further removed from his life at home, as evidenced by his inability to feel connected to the tragedies that Beatrice describes-- at first in detail, and then, cynically and in passing, as she senses Peter does not want to hear about them, or does not care.  He begins to become alien himself, losing all sense of the emotions that make him human, and he begins to reminisce about his former life, in which he was a drug addict and a thief.  This, however, leads him to think about meeting Beatrice, falling in love with her, and being saved by finding a religion to guide him.  What is beautiful about this novel is that it extols the virtues of passion rather than of the Christian faith itself, and argues for the wisdom of having some sort of guiding ambition in life.  In the novel, the idea of a loving, supporting relationship is closely bound with a worship of God.  While the Oasans have this love of God-- they name themselves Jesus Lover One, Jesus Lover Five, etc.-- they do not seem to have the same system of pair bonding, gender, child-rearing, or any of the other family relationships that humans do, and their love of God is almost soulless in it's clinical application, although at one point one of the Jesus Lovers gives away to Peter that he/she is sad about the passing on of their mother.  Despite this, they have no emotional hang ups about the body once the life has left it, and use the carcass to attract and feed bugs that become part of their diet, a practise which disgusts Peter because of the sentimentality humans attach to the bodies of the dead, and the care with which they are treated.

While at its heart, the novel does deal with the end of the world, and the quote I have on the back of my copy says "I am with you always, even unto the end of the world", I would not say that this is a dystopian novel, at least not in a pure form.  In parts, the need to leave Earth and find a new home, coupled with heartless government programs reminded me of the film Interstellar (thankfully minus Mathew McConaghey's strange smart hillbilly character), and yet there was something quite subtle going on between the lines.  In my last review, I talked about a novel about anthropologists studying tribes being a method of studying the white culture the anthropologists came from.  I think the same thing is at work here.  By studying an alien population, Peter learns about himself and about the people he works for, and comes to the horrifying realisation that it may be too late to go home and save the things he loves.  Tantalisingly, the book is open-ended, but I am trying out optimism, and I would love to think that Peter makes it home and finds Bea, and they both find a way to make it back to Oasis, to live with the natives.