My father has always said that if you remember the 1960s, you probably weren't there.

Yet Charles Hall's novel, Summer's Gone, recalls the pinnacle of a young man's life during the late sixties and early seventies in such vivid detail, that it's like being transported back in time. 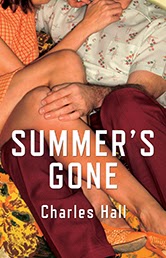 The book follows Nick, a young man from Perth who credits his love of folk music with a lie he once told his beloved Uncle Clem about loving the genre.  This was the moment he most equates to the butterfly flapping its wings which will later cause a tsunami half way around the world.  After spending a summer with Clem, and being given the gift of a banjo, everything changes for Nick.  He and his workmate Mitch start a folk band, and they soon meet sisters Alison and Helen who are singers, and form a quartet.  From then on, nothing else matters but music and love.  Alison and Mitch shack up, and are the more chaotic and promiscuous pair, while Nick and Helen develop a deeper relationship that is almost akin to love.  Yet it's not perfect-- it soon becomes clear that Helen has some hangups about being left by her old boyfriend, and her inability to relax her morals (and literally relax) cause some bedroom difficulties.

But the story itself begins years later, with Nick walking through the door of their St Kilda flat with a copy of a Beatles record in his hand and finding Helen's body on the floor in a pool of blood.  He's convinced he's responsible for her death, and the question becomes how does their perfect summer track to this tragic end?  And what will happen next?

As a narrator, Nick has a certain self-conscious quality which makes his a compelling tale.  At times, he is self-congratulatory, and at others, self-effacing.  Most of the time, he can be deliberately obtuse, particularly when he is getting to parts of the story where he is ashamed of his behaviour.  While educated, his speech can be colloquial and laconic, but as more of his memories are revealed, this is revealed as a coping mechanism, and a blokey response to the many hurts in his life-- while he experiences much disappointment and loss, Nick's response is not to break down but to push on, and run away, and this is represented in the way he tells his tale.  At times, the monologue style of the narration can make it hard for the reader to feel the real emotional impact of things, and a tendency to tell rather than show spoiled the tension of a few of the early moments in the text, such as Nick and Alison's first kiss.  Yet by the end of the book-- when the truth of what happened to Helen is discovered, for example-- the raw honesty of Nick's experience made tears brim in my eyes.

This is a novel that is born out of experience, and I think the biographical note on Hall is well worth reading before you start the book.  His descriptions of Perth in the 1960s are reminiscent of Robert Drewe's The Shark Net, and peppered with just enough concrete details to be realistic and entertaining-- such as the bedsit full of elderly ladies with cats whom Nick lives with in Claremont.  There is an impressive degree of realistic detail in several key scenes, such as on page 61, when Helen and Nick attempt to go to bed together for the first time, and in the scenes during which Alison and Nick hitchhike across the Nullabor Plains.  That sort of portrayal of a days long journey could only have been pulled off by someone who had done the trip.  I am convinced that Hall must actually have encountered the Nundroo Camel.

There is another saying about the past, and that is that 'The Past is a different country.'  That's certainly the case, but this portrait of longing for days gone by, coupled with the beauty of the Australian landscape makes the past come alive.  Another stunning book from Margaret River Press.