The Break
Deb Fitzpatrick
Fremantle Press, 2014 (I own a copy courtesy the publisher)

Fed up with corporate greed and the humdrum lifestyle of the suburbs, Rosie and Cray pack in their jobs and possessions and move down south to Margaret River.  There, they surf and enjoy the solitude of nature.  Cray seems to love it, but Rosie struggles with the idea of isolation.  Meanwhile, Liza and Ferg's marriage is in trouble, and they think their son Sam has no idea but they're wrong.  When Ferg's brother Mike comes to town, battling demons of their own, things only get worse.  Is life in Margaret River as idyllic as it seems?  These are the questions the characters must ask themselves. 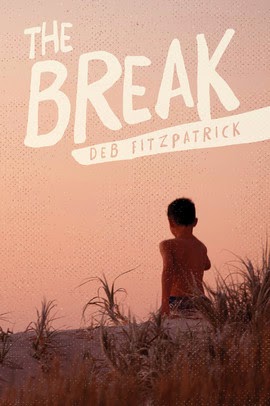 Partly centred around a fictionalisation of the Gracetown cliff collapse that happened in the 1990s, this novel is the perfect mix of tense, family drama and powerful nature writing.  It is peopled with characters who are real, and interesting, and the interactions between them are moving and authentic.  While the natural disaster is a key event of the piece, it is by no means the whole of the plot.  Fitzpatrick uses her character relationships to explore the ups and downs of life outside of the big city.  From the smaller issues, such as the effects of tourists on the lifestyles of the locals to the bigger issues such as the desolation of local landmarks by developers, this book is an in-depth analysis of life in Perth and Margaret River that feels true to the reader.  One of the major themes is the determination of the local media to turn personal tragedy into a circus for the entertainment of readers, and Rosie, arguably the central character, must fight her role in this industry.  While she wants to write, she wants to be the kind of writer who understands the human element of her stories, and not just what the shock value could do for circulation figures.  I believe this attitude mirrors the concern of the writer herself in crafting a book which figures an existing tragedy-- the worst natural disaster in WAs history, in which nine people lost their lives.

The writing style in this book is beautiful, and the clarity of vision in the opening line took my breath away.

"They'd sent Rosie Curran to make a story out of a young man's despair, though not in so many words."

This same clarity is displayed in the ending of the novel, when townspeople must come to terms with the disaster.  While not all the issues are solved, in the summing up of the story, there is the glimmer of hope; hope that Liza and Ferg's marriage will survive, that Mike will shake his demons, and that Rosie will learn to love the Margaret River lifestyle.  I did feel that the disaster itself received less page space than it needed for the emotional impact intended, but overall, I really enjoyed this book.

You can catch Deb Fitzpatrick at this year's Perth Writers Festival, talking about her transition from writing for Children and Young Adults to writing Fiction for Adults.  If you ask me, I would say this has been an extremely successful transition.
Labels: book review deb fitzpatrick local writers perth writers festival perth writers festival 2015 reading recommendations reviewing the break