Book Review: The Girl on the Train

Rachel rides the slow train to London every day on her way to work.  The journey takes her past a row of houses she knows well-- she used to live in one with her husband, Tom.  Now, Tom lives there with his new wife, Anna and their baby girl.  Rachel doesn't like to think about that house anymore.  A few houses down lives another couple.  To Rachel, their lives seem perfect.  She names them Jess and Jason.  But nothing is as it seems, and when Rachel witnesses 'Jess' kissing another man, she is drawn into a chain events that will have her find out just how far from the truth her little fantasy really was. 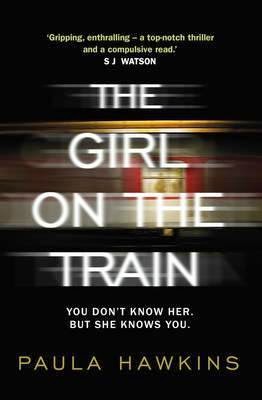 Called by many sources 'this year's Gone Girl', The Girl on The Train is an intense psychological thriller where the plot is hinged on three duplicitous narrators.  First, there is Rachel, the eponymous girl on the train.  She's not really a girl at all, she's in her thirties, and she's recently divorced, depressed, overweight, unemployed, and quickly becoming a raging alcoholic.  Then, there is Anna, the second wife of Rachel's ex-husband Tom.  Anna was the other woman, the one Tom left Rachel for after a drawn out period of pain and heartache.  Now, they have a baby.  Their life would be perfect if Rachel would just go away.  But she calls Tom in the middle of the night and turns up at the house, drunk.  She even tried to abduct baby Evie once.  The third voice in the novel belongs to Megan Hipwell, who is known to Rachel as Jess.  Her narrative takes place before the others, leading up to her mysterious disappearance the day after Rachel witnesses her kissing another man.  To Rachel, "Jess" was happy and professional, but in reality, Megan is rapidly losing control of her life.  After an accident that killed her brother, Megan spent most of her early twenties running away from her past.  Her marriage to Scott, aka Jason, doesn't seem to have stopped her troubles, and he suggests she see a psychologist.  But how can you work out what really happened when the story is told from the points of view of a drunk, a cheat and a liar?

At its heart, The Girl on the Train is a powerful novel about emotional and physical abuse.  Each woman has become damaged in her own way because of the way that men in her life have treated her.  Rachel is convinced that she is worthless because her drinking is to blame for the deterioration of her marriage.  She has been told that she hit Tom, abused his coworkers and embarrassed him in public, and as she was so blind drunk she blacked out, she has to take his word for it.  But the further Rachel gets from Tom's influence, the more things start to look different.  The night Megan Hipwell disappeared, Rachel was on their street, blind drunk, and while Tom says he came looking for her and drove her home, she begins to remember things that don't quite fit that explanation.  Did she hurt Megan?  Did she see who did?  The mystery raises more questions for Rachel than just whodunnit.

The writing style in this book could not be described as literary by any stretch of the imagination, and I have to admit I found it hard to get into this book.  Yet just like with Gone Girl, I couldn't look away.  The plotting of the book is clever and tense, leaving you just at the right moment to make sure you turn to the next page straight away.  It was pointed out to me by a friend that I must keep in mind that the narrators are telling the story and the level of language use will be part of characterisation.  In which case, this makes perfect sense.  Rachel is a drunk on a train, she's an ordinary person in crisis, and she isn't going to care about grammar.  Still, I did find this jarring at the start.

I hate Gone Girl, not because it was a bad book but because it made me depressed and disgusted with people... it also had an 'only in America' feel to it... but The Girl on the Train was gripping, cleverly plotted, and had some meaningful themes at work under its surface.  For that reason, I give it 3.5 stars.
Labels: book review crime gone girl paula hawkins reading recommendations review the girl on the train thriller