Since when was 2015 the year I was going to become interested in gender theory?  It seems almost completely by accident, my reading habits have started me on a course of thinking that has me fascinated in the portrayal of women in fiction and in culture in general.  I'm not complaining-- after all, I do believe in a need for feminism-- I've just never actively pursued it before. 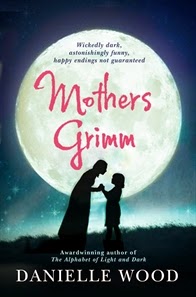 Take Mothers Grimm for example.  This quartet of stories by Danielle Wood focuses on the idea of the Mother in fairy tales, arguing that 'There is a reason why the good mother is always six feet under.' And it's true.  Think of Cinderella.  The death of her mother is the beginning of her troubles, and her step mother is the biggest problem that she faces on her road to happiness.  In some manifestations of the story (i.e. NOT the Disney version), Cinderella's mother is actually the fairy godmother.  Cinderella goes to the willow tree planted on her mother's grave and asks to go to the ball, and like magic, it is made to happen.  (For those of you who have seen Into the Woods, this is the version being referenced.  I believe this is the Brothers Grimm version but I could be wrong...)

But Mothers Grimm is more than just updated fairy tales, and if you pick up this book expecting Cinderella to have a pumpkin turn into a Porsche so she can go to a rave, you're going to be severely disappointed.  In her opening essay, Danielle Wood meditates on the idea of motherhood in an honest, if slightly cynical way.  Case in point, this exchange between her fictional partner and the second person you who is the subject of the essay

This kind of wry humour marks the book, but it belies a quite realistic truth-- the modern woman faces a difficult challenge in trying to live up to the "Good Mother"mythology of our society, and it can be psychologically taxing or even damaging.

In 'Lettuce', Meg attends a prenatal yoga class which is peopled with women she's gone to school with, some of whom are her friends and some of whom aren't.  Meg battles body image issues which stem back to a gluttonous (if somewhat tangential) episode of eating orange cream biscuits with the girl who lived across the road.  Her partner Jason now calls her 'Fat Guts' and 'Porky' in an affectionate way (if such a thing can even be possible), and her self-image issues are made even worse by the appearance of a woman in the Yoga class who seems to have it all.  She nicknames the woman Treasure, because she has a treasured look about her, and begins to craft elaborate stories around her about the baby's father.  The good mother, it appears, has arrived.  But is Treasure really as perfect as she seems to Meg?  This is the question that this story answers, and does so in a quite open ended way.  As for its connection to fairy tales, well-- the title refers to Rapunzel, and Meg and Jason own a nursery, but the link is more thematic than that, and it is up to the reader to decide what is significant or not.

The other stories in the collection are similar, but the real stand out is 'Sleep', a tale of teen pregnancy which is loosely based on the Sleeping Beauty fable.  There are elements of many stories at work in this story, and it is slightly dark and delectable, although it doesn't feel like it could happen here in Australia.  It has an old money, Connecticut, Gilmore Girls sort of feel to it.  The characterisation is delightful and the dialogue, particularly between the girl and her grandmother is snappy and unique.

All of the stories in this collection have slightly ominous endings, but none-- bar 'Sleep'-- feel like the ending is final and irredeemable.

The message in the book is the real star, and hats off to Danielle Wood for making me-- a childless person-- connect with issues of Motherhood so strongly.

I gave this book four stars.


You can also check out a video review of this book done by Natasha Lester here.