The Snow Kimono
Mark Henshaw
Text Publishing, 2014 (I own a copy courtesy the publisher.)

When Auguste Jovert receives a letter from a young woman claiming to be his daughter, he at first dismisses it and throws the letter away.  Too much time has passed.  He is an old man.  What use does he have for dredging up the past?

But then, two unlikely things happen.  The first is that Jovert is hit by a car.  The second is that he is contacted by a neighbour, Mr Tadashi Omura, a former Japanese Professor of Law who wants to tell him a story.  That story, as much as Jovert resists it, worms its way under Jovert's skin, and causes him to realise that we can never truly see ourselves except through the eyes of others. 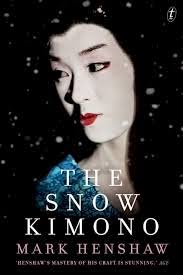 In fact, this is a major theme of the novel, and the reason why Omura insists on telling his story to Jovert.  While Jovert is the central character of the novel, his is not the central story.  This story within a story frame reminded me very much of the set up in Wuthering Heights, when the stranger who comes to town is told the story of what happened to Cathy and Heathcliff, and then must make his own mind up about what is happening in the house.  But in The Snow Kimono, Jovert seems almost an irrelevance, except to make the crucial point about identity that Omura is constantly trying to make-- that we must see ourselves through the eyes of others.

The story that Omura tells begins with him telling Jovert about his daughter, Fumiko, who is not his daughter at all.  Her real father is a man named Katsuo Ikeda and when Fumiko was still young, Ikeda wrote to her and told her that he was her father and that he was coming out of prison and the first thing he wanted to see was her face.  Omura then goes back to the beginning of the story to tell why Ikeda was in prison in the first place.  It is an intricate and interesting story, beginning with Ikeda's pretensions that he is a great and powerful writer during his student days, and ends in the snowy mountains above Osaka; a story of love, and loss, and mistaken identity, with a little bit of stalking and grooming of small children thrown in just to make it suitably dark.  This is not a novel that bears much discussion in a review, as part of its magic is the subtle dawning of the truth, and I drew immense satisfaction from working this out myself.

However, the frame story, that of Jovert and his daughter, and his estrangement from his ex wife were a drag on the story.  While I liked Jovert as a character, I felt like his personal struggle-- will he find his daughter or leave her be-- was a complete irrelevance.  His function, as the sort of passive detective, the receiver of the story was enough, without him having to have his own story to tell.  I think the tale of Jovert's family is probably a tale for a different book, and probably should have been either toned back or left out entirely.  It detracted a little, a distraction that came right before the stunning revelations about Omura that completely change the reader's (or this reader's) perception of the entire book.  This book is like the snake that eats it's own tale, it begins where it started, what happens at the end has bearing on the beginning, and I think it is a novel that needs to be read more than once.

Other strengths of the book were Henshaw's use of imagery to conjure up the snowy mountains and the beautiful Japanese cities, the University campus and so on.  For those with some knowledge in Japanese culture, there are added nuggets of meaning, such as the fact that Fumiko- who was born in the snow- means Winter Child as far as I can remember, and the fact that the famous Japanese writer Katsuo Ikeda has the same initials as real life writer Kazuo Ishiguro.  (In fact there is a character called Mr Ishiguro as well.)

I really enjoyed this book, and gave it four stars.  The strengths were enough to counteract the strange irrelevance of the frame story, and I understand why this book was given high accolades in many of its mainstream reviews.
Labels: book review japan literature mark henshaw psychological drama recommendation review text publishing the snow kimono thriller