Why the Changes to the WA Premier's Book Awards Will Make Our State Poorer, Rather Than Richer

This piece was written in aid of a feature in the POST newspaper, and thanks must go to David Cohen for turning it into something suitable for that publication.  If you would like to help, please consider signing this petition.

On two separate weekends this month, West Australians have flocked by the thousands to gather together and celebrate the Perth International Arts Festival.  The first occasion was of course the incredible journey made by the Giants as they crossed Perth city; the second was the Perth Writers’ Festival held at UWA between the 19th and the 22nd of February (which was attended by 44 000 people, up from last year's 38 500).  Yet these events coincide with what I hope will be seen as a controversial and indeed upsetting decision on the part of state government to halve funding to the WA Premiers Book Awards.  The decision was announced on the State Library website in a perfunctory statement which reads, “The West Australian Premiers Awards are moving to a biennial format, with the next awards to be presented in 2016.”

Western Australia has a long tradition of playing the poor cousin to its Eastern States counterparts when it comes to the arts.  For most of the early 20th Century, we imported our own culture back from Sydney or Melbourne, or lost our artistic talent who had to move away to make any inroads into their artistic careers.  The geographical isolation of Western Australia made itself felt again and again.  A cut to the funding of the award is a major deterrent to emerging artists in our state, and perpetuates the idea that the arts are valueless, frivolous and dispensable.  It devalues the contribution being made by Western Australian writers to literature as a whole.  But what the incredible turnouts for both The Giants and the Perth Writers’ Festival indicate is that Western Australia is a community of people crying out for more culture, not less.

As a bookseller, I have seen the increased sales that a book can experience simply through being shortlisted for the award.  Previous winners have included Shaun Tan, Kim Scott, Gail Jones, Dorothy Hewett, and of course, Tim Winton.  A nod from the judges of such an award can make the difference between a great book languishing on the shelf and becoming a best seller.  One only has to think of the meteoric rise of Richard Flanagan’s The Narrow Road to the Deep North after its recent Man Booker Prize win.  This book also won last year’s WA Premier’s Book Award in the fiction category.  For established writers like Flanagan, perhaps it might be harder to see the impact, but what about last year’s Emerging Writer’s Award recipient?  In 2014, the Award was given to local author Yvette Walker for her book Letters to the End of Love.  Walker says of the experience;

“Winning the WA Emerging Writers Award was the proudest moment of my writing life. In a book market dominated by big name international authors, these awards give West Australian writers three things they lack: recognition, exposure, and money. The WA Premiers Awards show that WA is serious about celebrating and investing in writing talent. Making them a bi-annual prize shows that the current government seriously undervalues the importance and impact of these book awards on WA writing culture. “ (Yvette Walker in an email, 23/2/2015)

In this case, the prize not only provided recognition for an excellent novel, but also to a publisher who has been doing great things for emerging writers—The University of Queensland Press.  Local publishers such as Fremantle Press, UWA Press and Margaret River Press have also presented strong showings in the awards.

Western Australia has a strong and vibrant writing community, but decisions like this one will harm the great leaps of progress that these communities have made, perhaps forcing more great writers and artists to seek fulfillment elsewhere the way they did in the early decades of the last century.  Perhaps they will go to Queensland, where the Queensland Literary Awards have been established in response to a similar decision made by Campbell Newman in 2012.  Newman infamously scrapped the State Literary Awards, and the community outcry is still being felt today.  Perhaps this is a warning to Colin Barnett—threaten our arts, and we will fight you. 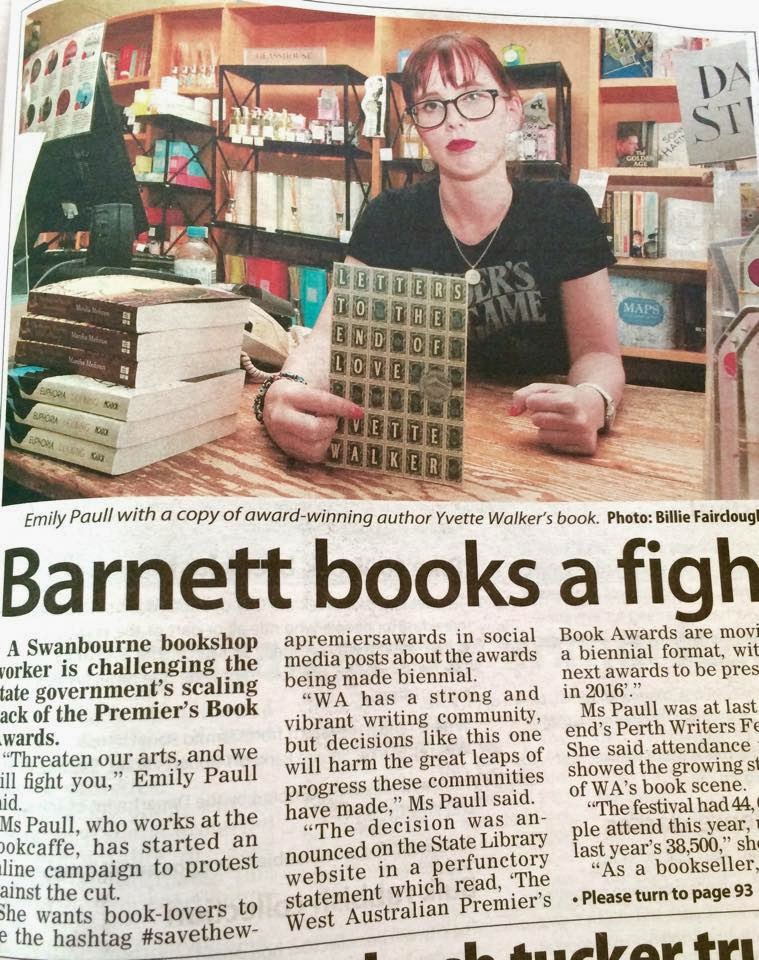 If you disagree with the decision to cut funding from the WA Premier's Book Awards, I encourage you to be be vocal.  Write, blog, tweet or send smoke signals expressing your thoughts, and for any social media posting you may do, I encourage you to add your voice to our hashtag campaign, #savethewapremiersawards

Some interesting articles for further reading:

WA Authors speak out about the changes

UQP declines Campbell Newman's biography on the grounds that it would be a betrayal to the literary community in Queensland to publish it.