Book Review: In Love and War by Liz Byrski

In Love and War
Liz Byrski
Fremantle Press, 2015 (I own a copy courtesy of the publisher)

Liz Byrski grew up in a small English town known as East Grinstead, which you may or may not know of as being near the place that AA Milne based the Hundred Acre Wood on for the Winne the Pooh stories.  During the Second World War, East Grinstead was the home of celebrated and pioneering plastic surgeon Archibald MacIndoe and his 'Guinea Pigs', mean who had been badly injured in RAF missions such as the Battle of Britain.  Thanks to MacIndoe's revolutionary approach to reconstructive surgery, these men were given back functional (if not beautiful) faces and hands, and they were given a semblance of dignity befitting their sacrifice.  The men of the 'Guinea Pigs' club still meet to this day (though their numbers are dwindling), getting together to reminisce on the mateship and the hijinks that got them through their recovery periods.

It is these men, this surgeon, and this hospital that Liz Byrski has written about in her new book In Love and War, which is more memoir than history, though the research she has done is astounding.  Using first hand accounts as well as records, articles and site based research, Liz Byrski traces the history of the hospital, and the men who scared her as a little girl in the village, not understanding where these  deformed people had come from, or why.  By inserting herself into a quest for the truth, Byrski has brought heart and relevance to a story of something which happened a very long time ago and made it a heart warming story of making amends. 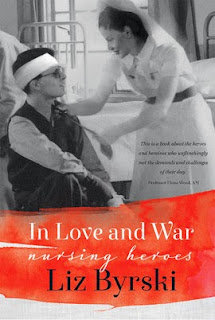 The 'Guinea Pigs' don't get all the glory.  In Love and War is the tale of these brave men and their surgeon, but also of the young nurses who came to look after them, and when it comes to uncovering the nurses' experiences, Byrski does not hold back.  With the dogged determination of a journalist, Byrski seeks out nurses who are still living in the area, documenting her efforts in driving far and wide to see them.  Not all of the women are happy to talk, and not all of them remember the time fondly; and the writer does not shy away from this evidence which contradicts the happy image of the hospital as a place where miracles were performed and fun was had.  For some of the nurses, who were very young, the work was confronting and the effort to pretend the young men's faces didn't shock them was difficult.  But worst of all was the casual attitude to sexual promiscuity, and the implication that the young women were expected to put up with the sometimes bad behaviour of the men towards these young women.  For some, it was a rollicking good time, but for others, the pressure to have sex with these young men was frightening and they felt they couldn't say no.  Byrski shows the two sides of MacIndoe's hospital, reserving all judgement in a way that lets the reader form a full picture and make up their own mind, and I feel like this was an excellent tactic.  It is here that the genius of the subtitle is revealed... on which word should the emphasis be placed?  Nursing heroes or nursing heroes?

Liz Byrski is a beloved West Australian writer and her fictional novels are always well-received, but I feel like it is her non fiction writing in which she really hits her stride.  In Love and War is no exception.  It is frequently very moving, and extremely informative, but can be read in a single sitting if you so choose.