If you're a big Thomas Hardy fan like I am, or if you're a fan of the British writer David Nicholls (One Day, Us) you might be a little bit excited about the new adaptation of Far From the Madding Crowd that's just been released in Australian cinemas.  Nicholls has worked with Thomas Hardy's novels before, adapting the more well-known Tess of the D'urbervilles for the BBC, and I think his deep connection with Hardy's themes of class, gender, and the improbability of circumstances and luck is clear in his own writing, where happy endings are not mandatory, and rabbits are not pulled out of hats just to make true love conquer all. 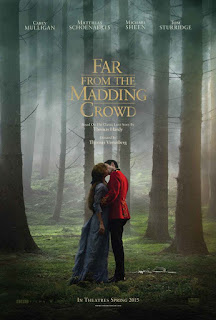 For those of you not familiar with the story (and I'll admit that while I own the novel, I haven't yet read it but I will, I swear), I'll do my best to bring you up to speed, but remember that the novel and the film will be two completely different texts.  The film follows Bathsheba Everdene, a young orphaned woman who comes to work on her aunt's farm.  She's a spirited but hardworking young woman (played in the film by Carey Mulligan) who finds her unusual name uncomfortable to hear said aloud, but has no idea as to why she was given the name as her parents are no longer around.  While out on a ride, she catches the eye of Farmer Gabriel Oak, who owns 1000 hectares of land and 200 sheep or so, and is doing well for himself.  The two become friends, but when Oak proposes marriage to Bathsheba, she refuses, saying that she likes the idea of being a bride, but only if she doesn't have to have a husband afterwards.  Her ideas at this point in the film are quite ahead of her time (the late 1800s), and this makes her easy for the modern viewer to relate to.  She believes in working hard, and equality for the sexes, and this is an aspect of her character which grows stronger over the course of the film, though she is not without flaws. She also believes that it will be uncomfortable for her to marry Oak as he is a landowner and she has no property, no name, only an education.

Time passes, although how much is unclear, and Bathsheba leaves her Aunt's farm to take her place as the owner of her own estate, left to her by her Uncle.  But for Oak, fortune has not been so favourable-- in a particularly distressing scene, a young and inexperienced sheep dog chases all of Oak's sheep over the edge of a cliff, leaving him destitute.  He sells his farm, leaves town, and heads out on the swag in search of work.  Their fortunes well and truly reversed, Bathsheba and Gabriel meet again.  After he saves her property from a fire which threatens her barn, she hires him as shepherd and superintendent of her farm (which mostly produces grain) and keeps his counsel as her trusted and truest (perhaps only) friend.

Gabriel is not the only person in pursuit of Bathsheba's heart and hand in marriage anymore.  At the sales yard, when Bathsheba and her wares are slighted by buyers because she is a woman, she catches a glimpse of the town's most eligible bachelor, Mr Boldwood.  Boldwood is her neighbour, an older man with a surly and miserable countenance but a large fortune.  She at first thinks he may be an ally but he too slights her in the marketplace, and later, she and her companion Lyddie decide it would be a good idea to send him a Valentine's Card in jest.  Mr Boldwood takes her rather seriously, however, and he too asks for her hand in marriage.  She says she will think, as the idea of her saying no makes him visibly miserable.  As he waits for her answer, his slide towards obsession becomes clear as the sides of his hair turn whiter and whiter.  She eventually refuses him, after a 'change of heart'.

That change of heart is a far too pretty, far too smarmy sargeant from the army whose name is Francis Troy.  Bathsheba stumbles upon Frank trespassing on her property after he has been left at the alter by Fanny Robbin, a young woman who used to work for Bathsheba's uncle.  Frank does not know that Fanny has not jilted him, but in fact went to the wrong church and has lost touch with Frank who ran away from his post.  Bathsheba is taken in by Frank's charms, but for me as an audience member, he was ringing alarm bells in my head from the moment he decided to demonstrate his talent with a saber, slicing at the air around Bathsheba's head and accidentally cutting off a piece of her hair.  When he takes a kiss and *erm* some liberties as a reward, the klaxons were well and truly sounding.  Yet while I (or any other woman I hope) was running away in my head, Bathsheba was suddenly behaving like a silly girl, running off to meet her young man in Bath and coming home his wife.  The next morning, virginity well and truly gone, she wakes up and the camera zooms in on the look on her face, which is a look of sheer 'What have I done?'

I won't tell you too much more of the plot, as this story's drama is hinged on the tangled plait of Bathsheba's three possible futures.  It was clear to me from the start that Oak was the one for her; the on screen chemistry between Mulligan and Matthias Schoenarts was warm and compassionate, and for the most part felt safe, if a little fatherly at times.  But all three of her men had their redeeming features, or were supposed to.  And all three had pitfalls, making the viewer's allegiances as hard to pick as Bathsheba's at times.  But the more we got to know these men, the more we disliked or feared or felt sorry for two of them, and the more we got to know Bathsheba, the more we realised that she would probably be okay on her own.  After all, she has money and an education by this point in the film, and can choose to marry for love-- the only reason one should marry in her view, though not in the view of her society.  This adaptation is thoroughly modern and very topical, despite it being a 'period drama' and an adaptation of a Victorian novel.  It is a film with a heroine struggling to find her place in a world where men want to own her as a possession and a trinket, and where men get to decide how she is supposed to live her life.  She is at times impetuous and blunt, but always sure of what she wants and frequently wise beyond her years too.  Perhaps my favourite line in the film is when she claims it is unfair for men to expect women to be able to put their feelings into words invented by men to describe their feelings.  (That's not verbatim and Nicholl's had it much more punchy in his screenplay.)

Cap off this amazing storytelling with the gorgeous cinematography and scenery and you have a film that I want to sit through again and again and again.  I haven't even had a chance to mention the comedy provided by Lyddie or the complexities of the Frank> Fanny > Bathsheba plot, but I really must leave something for you to find and delight in when you see it for yourself.

Favourite film of the year?  Perhaps, but it is only June.

Five stars.  Will see again and will definitely read the book.  Bravo.