The Margaret River Readers and Writers Festival was on over this long weekend in the picturesque South West Region of WA.  The festival is in its seventh year of life, and this was my second time attending.  More than anything else, MRRWF is a festival of ideas and a festival which celebrates creativity in all its forms, which left me with a great sense of the enormous privilege I have been given in being allowed to be part of such a vibrant community as the writers community in Western Australia.  This year, the Festival boasted such illustrious guests as the divine Mr John Marsden, whose wise words of wisdom I almost wept over at this year's Perth Festival in February, the courageous Isobelle Carmody, and the many-times-award-winning Michelle de Kretser.  There were also three comedians on the bill this year and that was a treat indeed.

I was lucky enough to be heading along to the festival with Louise Allan, an up and coming writer herself, who was shortlisted for the City of Fremantle TAG Hungerford Manuscript award earlier this year.  Louise and I have been in a writing group for some time now, and I am always in awe of the fabulous ways her mind works and the fact that it is IMPOSSIBLE to have a boring conversation with her.  We road-tripped down from Perth to Margaret River, taking an unplanned detour through Bunbury when we missed the turn off onto the bypass (oops) and arrived just after lunch, in time for an afternoon session on Autobiography and Family History featuring three Margaret River based writers and last-minute rope in David Leser.  It was at this point that we met up with the third member of our trio, prolific and hilarious blogger Rae Hilhorst, whom I had never met before except through social media.  The three of us headed back to our amazing accommodation, a three bedroom townhouse walking distance of all the main shops and restaurants, and a very short hike from the Festival venue. 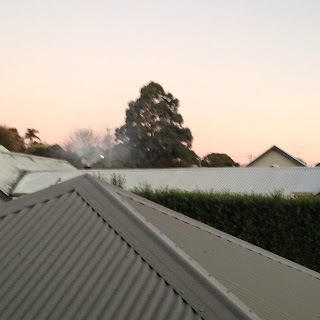 That night, we headed back to Festival HQ for the opening celebration (after a short detour to Swings and some delicious wine and pizza) where we met up with many familiar faces for wine and nibblies.  The evening was one of raucous laughter, or at least it was for me, as Justin Heazlewood, AKA the Bedroom Philosopher took to the stage to make fun of himself, and of us, in song.  It was at this ceremony that we met fellow blogger Reading, Writing and Riesling and reconnected with Jane, whom we had befriended last year at the festival!  We also spent some time chatting to fellow WA Writers to watch (as seen on Amanda Curtin's blog) Amanda Gardiner and Kim Coull, and their friend Jo, actor/writers Claire and Glen, Margaret River Press publisher Caroline Wood, authors Lynne Leonhardt, Amanda Curtin and Laurie Steed... (takes big breath!) so as you can see it was a very social event for a bunch of introverts.

After a brisk and chilly walk through the fog back to the apartment, we were greeted by the thoughtful hum of a central heating system which had turned itself on while we were out (Hooray!) and stayed up late into the night talking about the various merits of Outlander, Game of Thrones and Poldark (which I haven't seen yet but I'm thinking it's on the to do list!)  Then, it was off to bed to turn on our electric blankets and dream of John Marsden, who we would be seeing that very next morning.

Lovely Rae started our day off the right way by sussing out a) where the good baked goodies were sold and b) that there were attractive young football players in the vicinity when she went out in search of caffeinated beverages with which to wake us up.  Coffeed and dressed (and looking very artistic, I must say), we started our walk up the hill, only stopping to get coffee number two as we reached The Urban Bean.  The first item of the day was John Marsden, whose philosophies on writing, teaching and taking risks perfectly explain why I love his books so much: this is a man with his priorities in the right order, and a man who knows how to have fun, and how to have adventures, and he is also extreeeeeeeemely smart.  We each left that session with a little crush on him, and I am desperate to revisit the Tomorrow series if I can find the time, and possibly revisit my 12th year of life in doing so!

The next session of the day was Luke Ryan talking to Steve Butler about his memoir A Funny Thing Happened on the Way to Chemo, which is his account of having had cancer TWICE.  I was struck first of all by Luke's optimism, and also by his humour (but then again he is a stand up comedian), and his session got me thinking about the way I deal with stressful situations.  He was very easy to listen to and this was also quite a funny session despite the subject matter.

Then there was a session which was a panel on the resurgence of short fiction we're currently seeing in Australia.  The panellists were poet, Nandi Chinna, first prize winner from the Margaret River Short Story competition, Melanie Napthine and SW Regional Writers Prize Carol McDowall.  Though both short fiction writers admitted they were only just beginning their journeys as published writers, they both had some profound insights into writing and especially into where their stories came from.  Session chair, Laurie Steed, maintained his reputation as an interviewer who does not tolerate question-comments from the audience, thereby making himself the hero of a lot of people there!  Part way into the session, the lecture theatre actually began to fill up with smoke and many people were on edge, thinking they may have to evacuate, but it was just our lunch being cooked on a barbecue out in the courtyard, blowing smoke in through the gaps in the glass doors...

After lunch, comedian Sami Shah told us about his book I, Migrant and made us laugh and laugh, but also called some big issues into question, leaving us with lots to think about.

I left Louise and Rae to listen to a romance writing session with Fiona Palmer and took myself for a walk back along the main drag, stopping at the shop that sells the delicious fudge!  Back home, I wrote up a storm at the little kitchen table and I had almost finished by the time the others got back.

That night we were entertained at the home of Lily Malone, an extremely lovely local author who has written and published several books and is now working with Escape Publishing.  Lily cooked up a hearty stew and we ate this by the fire pit in the yard, looking up at the stars and listening to the distant thump of a band playing somewhere out in the darkness.  I was struck by her generosity in having us all over at such short notice, but also at her warm and intelligent advice giving, when us three novice writers asked her about the tricky ins and outs of this writing life.  All of her answers were so well considered and wise, and I think we all left feeling buoyed by what she'd told us.  If you're reading this, thank you Lily!

Day three was Sunday and it began with Isobelle Carmody, who is the author of thirty five or so books beginning with the Obernewtyn series which she wrote the first book of at age 14 though it wasn't published until later.  She was probably the most engaging speaker of the weekend, and she told us about her travels throughout the world, and her deep seated belief that brave people are not brave at all because they have no fear in them whereas she is profoundly cautious in everything she does.  It was a really fascinating talk!  It contrasted sharply to the next session with Michelle de Kretser, which was a far more chilled panel.  De Kretser was very softly spoken and she gave some deep insights into the journey she took as an academic and then a book reviewer and an editor and then a writer and so on and so forth.  While it wasn't the most invigorating of sessions, I found it very inspiring and I related to a lot of what she said.

We bloggers-three headed off to Sails for lunch, then split up so that Louise could take in some nature and Rae and I could explore the retail offerings of Margaret River.  That afternoon, we met up again to listen to Amanda Curtin and Richard Rossiter talk about Elemental, which all of us agree is an astounding, beautiful book.

There was nothing left after that but to wait for the closing event, and this was great fun.  Justin Heazlewood, Sami Shah and Luke Ryan took to the stage to do comedy, and while some of the material was repeated from earlier sessions, other bits were fresh and new and hilarious.  I am definitely going to see more comedy shows in the future, as it was so relaxing to let my guard down and just laugh.

We sat goodbye to our festival friends then headed out to El Rio for dinner.  We were all reaching the limits of our energy, and though it was some time until I finally climbed into bed, I did feel incredibly satisfied that I had gotten the most out of the weekend. 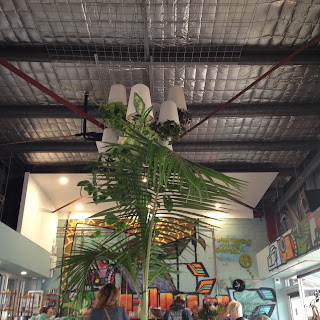 As far as sampling the local wares went, I think we did pretty well this weekend, and it was nice to unwind and hang out with friends, particularly of the writing variety.  My head is in a very literary headspace and I hope that it will last until Friday, my next day off work with NO UNI WORK TO DO (YAY) when I will be diving head first into whatever project takes my fancy.

Thanks to all who helped make Margaret River Writers Festival a huge success this year and especial thanks to Louise and Rae who took amazing care of me this weekend and helped me have a really really REALLY good time.  You guys are superstars.
Labels: john marsden louise allan margaret river writers festival road trip writing