I'm a bit late getting this one done.  For some reason July is always my least favourite month.  It's so busy, and it occurs at a point in the year where I can see how few of my goals I have achieved and how many things I still have left to do.  That's not to say some amazing things did not happen this month; for example, I ran an event at work with Stephanie Bishop, whose book The Other Side of the World I really enjoyed.  But on the whole, July was a month of adjusting and stress.

I still found some time to read, so here is a lovely picture of the books I read last month. 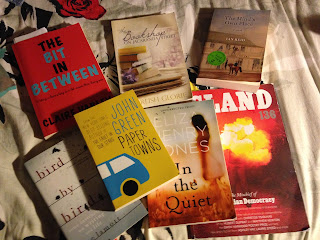 I bought this issue a shamefully long time ago and it's been my gym book... yes, I do read on the treadmill when I go to the gym and I am sure the other people there are staring at me.  I wouldn't know, I'm too busy reading.  Highlight in this issue is the story by Laurie Steed, which is framed as an interview with Deborah Triesman  from the New Yorker Fiction Podcast.  Laurie gets Deborah's voice so right that you can hear it in your head.  If you're not subscribed to Island, you probably should be.  Geordie Williamson is now the Fiction Editor, which is just the best news ever.

In the Quiet by Eliza Henry Jones

You may have already seen my review of Eliza Henry Jones' debut novel, or the tour of her bookshelf that she kindly did for me, but if you didn't, definitely check them out.  This is an amazing novel, and and incredibly versatile one.  It straddles literary and commercial writing, reminds me of those childhood years I spent wishing I lived on a horse farm, and made me feel all the emotions in the human vocabulary.  Read it read it read it.  I cannot stress this enough. Many people are intimidated by the fact that the narrator is a mother who has died, but this book is heartwarming and uplifting, and really, the best books are the ones which make you cry.

The Bookshop on Jacaranda Street by Marlish Glorie

Finally got around to reading it (sorry Marlish!)  This is a great book for anyone who has ever dreamed of owning their own bookshop, peopled with quirky characters and book snobbery galore.  It's been out for a while now but I have seen a few copies around the place.

Bird by Bird by Anne Lamott

This is the go to writing book for many writers I know and was recommended to me by writing teacher extraordinaire, Natasha Lester.  Not so much a book on how to write, but a book on how to live, this book raised a lot of emotions for me and sometimes got straight to the heart of the disillusionment I have been feeling.  There were segments that read like a hug and others that were like a kick in the bum.  Definitely a worthwhile read, but don't go into it expecting it to fix all your problems and have you published in an instant.  She makes it pretty clear that is never her aim.  One of the book's best lessons is that no one has to read most of the things you write in order for them to do you good.

The Bit in Between by Claire Varley

This one is a new release, a quirky love story set in Melbourne and the Solomon Islands.  I have a review which will be going up on Friday next week so stay tuned.

Everyone is nuts for this book at the moment because the film is out but I have to say it's the least well plotted of the John Green novels, out of the ones I have read.  The climax of the book happens in the first third and we spend the next two thirds slowly petering out.  I have seen criticisms online which say that Q and Margo are basically the same boy and dream girl combo from every other John Green novel, and I can see that comparison with Looking for Alaska certainly.  Not necessarily a bad thing because it's obviously a formula which connects with a lot of readers.  It didn't blow me away the way The Fault in Our Stars did though, and while it served its purpose-- a great pick me up after a terrible week-- I don't know if I'll now read Abundance of Katherines.

The Mind's Own Place by Ian Reid

Ian Reid's new novel, about five individuals in the newly booming Swan River Colony is immensely entertaining.  Ian Reid is the recipient of the Battye Fellowship and is doing intense historical research at our state library.  His efforts in giving fictional lives to real people shows the interesting connections that people had in the early days of Perth, and makes a lot of recognisable places new in their historical contexts.  I really enjoyed this book and learned a lot too.

What did you read this month?  Have you read any of these?  If so, what did you think?  Let me know in the comments.

Thanks for reading.
Labels: bird by bird claire varley eliza henry-jones in the quiet island magazine john green paper towns reading roundup the bit in between