This month was a busy one-- there's just something about the middle of the year!  I am back studying for another semester (or trimester as they have at Deakin) and this time around I am doing two units instead of one.  Interestingly, this week one of my units is focussing on reviewing!  I still managed to get through a few books in August, and some of them were pretty amazing!  Without any further ado, here are the books I devoured in the last four weeks... 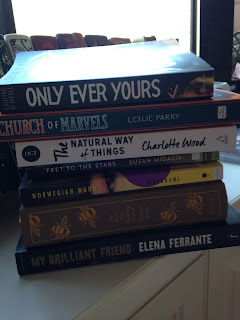 My Brilliant Friend by Elena Ferrante

There is a lot of buzz around Elena Ferrante's Neapolitan series, which wraps up in September with a fourth instalment.  Ferrante is an Italian literary sensation, and very few people have actually met her or know her true identity.  Notoriously private, she never grants repeat interviews to any publication, choosing to maintain her private life, and allowing people to interpret what they will about her from her books, which seem to be highly autobiographical.  My Brilliant Friend is a powerhouse of controlled prose, and follows Elena Greco and Lila Cerullo through the first phase of their lives, their childhood's and adolescence.  Lila is an enigmatic figure, mysterious and slightly unhinged but seems to have a power over the narrator, Elena.  Ferrante's depiction of female friendship is the most authentic I have ever come across, and while it was her wonderful writing style which pulled me in at first, I have kept reading for the sheer magnetism of her main characters.  I love these books.  I well and truly have what the internet has deemed #ferrantefever.

Far from the Madding Crowd by Thomas Hardy

Thomas Hardy has by far become my favourite writer from the classical canon.  He was a writer of the Victorian era, but was still alive in the first part of the twentieth century, which blows my mind... there are people alive today who were alive at the same time as Thomas Hardy!  Hardy's own life was intriguing, but it is his unusual characters and his dry humour which make his novels something different.  I had recently seen the recent film adaptation of Far From the Madding Crowd, and while I agree there are significant differences between the two texts, I enjoyed both immensely.  I've made it a new goal to continue reading my way through Hardy's backlist.

My book club book for August/ September, and also my first Murakami.  I don't know what I expected.  This is supposed to be the most realist of Murakami's works and the man can definitely write, but his portrayal of female characters as sexually curious and promiscuous left me wondering how many women Murakami had actually met in real life...  If you were to ignore some of the more lewd scenes, the book is an interesting meditation on the pressures of life, and very readable, but I don't know if I would read it again.

Feet to the Stars by Susan Midalia

The Natural Way of Things by Charlotte Wood

Charlotte Wood's Animal People was a book which really impressed me so I was very excited to get my hands on an early advance copy of her new book, The Natural Way of Things.  This is a very different novel, but very very intelligent.  It is going to be a book that keeps me thinking for a long time and I cannot wait for it to be released into the big wild world.  I plan to do a proper review later in the week, but for now, suffice to say:  The Natural Way of Things is a novel about a group of women who wake up imprisoned in an abandoned shearing station somewhere in the middle of nowhere.  Their jailers are tightlipped about who has ordered their kidnapping or why, and as time wears on it becomes more and more clear that they may be toughing it out for a long time.  The girls gradually grow to realise that what connects them all to one another is that each one has been involved in a scandal with a powerful man.  The novel meditates on the politicisation of the female body and the culture of slut-shaming that we seem to be developing in Australia.  It is a novel which reduces things to an animal level and leaves the reader gasping as they realise nothing that happens is too far fetched to be happening right now without us knowing.

Church of Marvels by Leslie Parry

This is yet another circus novel, in the tradition of The Night Circus, which I loved.  I have been putting off reading it for a while because I very recently read The Gracekeepers and I do not want to get circus fatigue!  This novel uses the historical perspective to gently tease out the implications of circus freakshows, revealing the inhabitants of many of these shows to be people born with disabilities and other minority groups.  There are many surprise revelations in this book and I do not want to give them away by talking too much, so I will just say that I found the topic of the book refreshing, if sometimes a little underdeveloped, and always sensitive.  It's hard to be the first to talk about topics which have been taboo, so this was a great book.

Only Ever Yours by Louise O'Neill

You've probably heard a lot about this book if you're on Twitter (and if you're not following Louise O'Neill, you really should be) because the author has a new book coming out this month.  This novel has been described as Mean Girls meets The Handmaid's Tale and I would have to say that is very accurate.  It's about a future of our society when population growth and environmental instability have lead to the world living in elite clusters.  People have altered their bodies so that it is only possible to give birth to sons, and there are ten young men in every cohort who are so important that science has developed the 'Eves', genetically manufactured perfect women who spend their childhoods in a special school where they learn to be perfect wives for these young men.  There are three times as many young women as there are young men, and those Eves who are not chosen become Concubines (for the sexual gratification of these men deemed inappropriate for Wives) or Chastities, a smaller group who look after the new Eves.  This book is subtle in its subversive themes and at first it seems like just another teen novel about bullying and bulimia.  But through the final year of school for frieda and isabel, as the girls begin to question the system, we see a horrifying process at work.  (The girls' names are never capitalised, as girls are not important.)  O'Neill is not afraid to pull any punches, and this book was a binge read I could not put down.
Labels: book review charlotte wood church of marvels circus novels elena ferrante haruki murakami louise o'neill only ever yours reading roundup the natural way of things thomas hardy