September was Ferrante month.  I'll try to write a longer post about my love for the writing of Elena Ferrante but I feel that words will probably fail me.  All through this last four weeks, I've been obsessed with her; this enigmatic, reclusive Italian writer who was the greatest novelist I had never heard of.  I read four of her books, out of a total possible seven, and this was no small feat considering that in total I read six books this month.

Those books which were not Ferrantes shared things in common with her work, so I guess she was guiding my choices a fair bit; I read a novel set in Russia during the war and a young adult novel in which a young girl has her hands cut off, so they were both fairly bleak.  But it's important to remember that bleak novels can also be some of the most insightful and most life-affirming.  It's through reading about the misfortunes that did and do still take place in the world that we can expand our worldviews, gain perspective, and leave our own comfortable couch corners.  That being said, it can be taxing, and so to start this month off I am reading a laugh-out-loud funny romantic story by my favourite Irish gal, Marian Keyes.

Uni finishes for the year for me this week, so I think next month will be a better reading month, and I can try to get back up to my goal of ten books in a month.  There are so many great books coming out this time of year and I have some catching up to do! 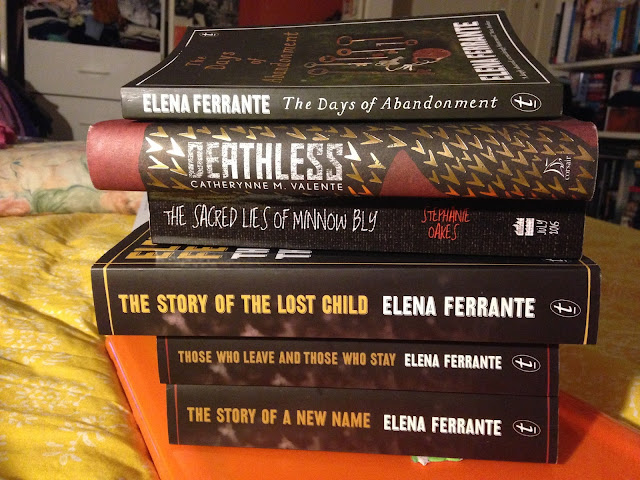 Books 2,3 and 4 in the Neapolitan series by Elena Ferrante.  Ferrante herself is as fascinating as her books.  She famously will not do appearances or interviews and very little is known about her personal life, but people have speculated that she and her protagonist Elena Greco share more than just a first name.  The Story of a New Name picks up where My Brilliant Friend left off, with ***SPOILER ALERT*** the girls entering early adolescence and Lila marrying the son of the fearful Don Achille, ogre of their childhood.  Lila's life has diverged from what Elena always expected of her, and she is now the rich and glamorous Senora Carracci, but things are not as they seem on the surface.  The gloss comes off the apple on the night of the honeymoon, and Lila later reveals to Elena that her wedding night was overshadowed with violence and fear.  But trouble is only just beginning for the girls.  Meanwhile, Elena continues to study, making her way through the years of schooling which many of those in Naples do not have access to, and therefore setting herself apart as special.  As the two girls' lives diverge farther apart, they question is, will their friendship survive?

The Sacred Lies of Minnow Bly by Stephanie Oakes

This book was the subject of a read-a-long hosted by the Perth YA Book Club (which you can join on Facebook if you're a big fan of YA, they host weekly discussions of great YA books).  It's a novel about a young girl named Minnow Bly who is arrested for assaulting a young man after she escapes from a 'Kevinian' Cult.  Minnow is severely traumatised-- the Prophet who ran the cult has ordered Minnow's father to cut off her hands.  How is a young girl with no hands supposed to survive in a juvenile detention centre?  As she remembers her time in the cult, sifting through what has happened, a clear picture begins to form of what might have caused the devastating fire which destroyed the cult's campsite and killed two of its members.

Deathless updates the Russian folk talk of Koschei the Deathless, who kidnaps a young woman and takes her to his home in the other world to be his wife; it equates the mythology of Russia with its early twentieth century history, comparing the war between the Tsar of Death and the Tsar of Life with the struggles of the Russian people first under the Bolsheviks and then during the war with Germany.  In particular the siege of Leningrad plays a particular role.  The main character is Marya Morevna, a young girl who has grown up seeing birds fall from the sky outside and become dashing men, who come to the house to wed her sisters.  When it is finally her turn, she realises that the thing she has longed for is much darker than it is romantic and she finds herself performing impossible tasks for the fearsome Baba Yaga in order to get the chance to become Koschei's Tsarista.  I did find this story interesting but I didn't connect with Valente's writing style.  She used some quite odd metaphors, and the narrative seemed to jump from section to section abruptly, weaving together different stories.  I had wished that she included notes about the original myths so that there was something to compare the new version to.  This one was for book club so it will be interesting to see what the other ladies think.

The Days of Abandonment by Elena Ferrante

I thought that the Neapolitan novels were impressive, but this novella absolutely punched me in the guts with the sheer visceral nature of its prose.  I felt Olga's pain, as she experienced her separation from Mario; her pain was not just the heartbreak of being left but also of feeling the life she had been comfortable in for a long time falling apart.  On the worst day of her separation, Olga finds herself unwell and trapped inside the apartment and things begin to get worse and worse for her.  I could not stop reading.  I just had to know whether she was going to be okay.  In the end, I was unable to hold it together; yes, a novel less than 200 pages long made me cry (and desperately want to hug my dog.)  While the Neapolitan novels have become fast favourites, I have to say this novella gets an A+ for impact.
Labels: book club catherynne m valente elena ferrante ferrantefever perth ya book club reading roundup recommendations the sacred lies of minnow bly