Pretty Is
Maggie Mitchell
Orion 2015 (I own a copy courtesy of my mother's TBR pile... thanks Mummy!) 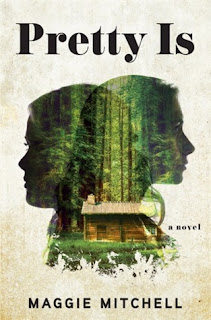 I picked out Pretty Is as a gift for my mother, who is a voracious reader of crime and mystery novels, and has impeccable taste in these types of things... so it can be hard to find new authors for her to enjoy!  Pretty Is has been billeted as perfect for readers who enjoyed The Girl on the Train (which in turn was deemed perfect for fans of Gone Girl) but I think to compare this novel to either of those books, and in fact to compare them to each other is a mistake.  First of all, doing so ignores the fact that all three books are challenging the very genre of the crime/ thriller by questioning the very assumptions that it is built on.  Pretty Is does this, first of all, by making the action take place more than 15 years after the crime is committed.  The story begins when Lois and Carly May, once victims of a bizarre kidnapping, are brought back together by their involvement in a film based on their experiences.  The film is based on a book that Lois wrote under a pseudonym, and Carly May (now known as Chloe Savage) has been cast to play the policewoman who solves the case and rescues the girls-- a character who did not really exist.

But their involvement with the film opens up old cans of worms for both girls, and the most disturbing of these is their lingering feelings of love for their kidnapper.  While he held them captive for six weeks, the girls were never harmed or interfered with, and until this point in their lives, the girls have never spent any time thinking about why.

The book is told in several parts.  The first is set in the present, and flicks back and forth in short segments between Lois's and Chloe's perspectives.  I was struck by how skilfully Maggie Mitchell was able to create these two characters, who were so similar and yet so very different.  Chloe/ Carly May is now an actress living in LA, harbouring resentment not towards the man who took her but towards the stepmother who seemed perfect to everyone but her and has profited from her relationship to Carly in the most heinous way-- with a tell-all book.  Chloe is a B grade actress, famous mostly for how often she has been killed off in her film and TV roles; the movie adaptation of Lois's book will be her big break and while she's tempted not to get involved because of how close it might take her to revealing who she really is, she's also sure that this role is going to be something special.  Carly/ Chloe is angry and untrusting and she also may or may not have a drinking problem (although she doesn't think so, and refreshingly, the author does not view this as some character flaw which must magically be solved when she works through her issues-- realistic and uncommon in this kind of book.)  As for Lois, she at first seems like the shy loner of the pair, and she is quick to tell the reader often that Carly May was the first, always and in everything.  She seems to harbour deep insecurities, seeing herself as the less pretty, the less interesting and the less central to attention.  As a child, she prides herself on being the smarter one, until she discovers that Carly May is intelligent too, and isn't just the air-headed beauty pageant queen to Lois's spelling bee champion.  But Lois has a tendency to position herself as the outsider, and uses her role as a writer to step back and observe people.  She seeks out darkness and trouble the way a moth seeks out a flame, as evidenced by her unwillingness to speak up when one of her students begins to hang around, claiming to know things about her past.  At first, one would be forgiven for thinking that Lois was plain looking, but this isn't the case even in Lois's mind.  In fact, both women know how attractive they are, and at times use this to their advantage.  They are both in control of what happens to them, most of the time, even when what they are controlling is possibly unsafe.

The second section of the book is a short story version of Deep in the Woods, Lois's book about 'Hannah' and 'Callie'-- Hannah being the Lois character, and Callie being Carly May.  Chloe is at first annoyed that her character's name has changed so little when Lois's character's name has changed so much, but later realises that Lois is trying to distance herself from her child self in order to try and write as honestly as she can, something she does not need to do with the Callie character.  But even this version has alterations in it, most notably an omission of a crucial event, and the addition of an escape attempt which perhaps is meant to disguise the unpalatable attachment the girls feel to their kidnapper.

In part three the book is back to switching points of view, as the action begins to ramp up.  Lois's faculty friend Brad, also an English professor, begins to feel like he will turn into a cheesy love interest but thankfully Lois puts an end to that... (and why she and Carly May are unable to form lasting relationships is never hypothesised fully, both characters displaying a disdain for psychoanalysing themselves, though Lois enjoys telling stories to psychologists.)  Lois is writing a sequel to her book, one which hints that something bad may happen to Hannah and Callie as adults, but it seems increasingly likely that the truth is imitating fiction.  As the tension ramps up, both girls escape to Canada, to the set for the film, running away into their pasts as a way to escape their present.  This is part four and I won't say any more about the plot because the book really does need to be read.

I was very impressed by the writing style of the book.  Maggie Mitchell manages to write a crime novel which leans towards a more literary style, and there is hardly a stereotype in sight, though her minor characters pale in comparison to her two leads.  Perhaps Mitchell's background as a short story writer is at play here; the careful reader might notice a reverence for specific details and slow pacing that is usually forgotten in a thriller, and perhaps the crime reader might be infuriated by the lack of answers the story's conclusion provides.  But I enjoyed this book, and I think I have learnt a lot from Maggie Mitchell's style, so I have given this book four stars out of five.
Labels: crime fiction girl on the train gone girl maggie mitchell pretty is short fiction. thriller