The days are getting longer and the nights are warm and perfect for reading.  In November, I read a lot of different books, a few of which I probably never would have selected for myself if I were left to my own devices.  There were fewer reviews than normal, but I am slowly getting my mojo back in that area of my life.  Writers block may or may not be an actual condition, or it may just be a convenient excuse to not do any work because I'm scared to fail in my current project, but regardless, November was an abysmal month for writing.  Coincidentally it was #Nanowrimo for many writers and to those of you who participated, congratulations to you for giving it a go.  The book I am working on at the moment began its life as a Nanowrimo project in 2009 and it's getting a restructure now.

But enough about books written.  Onto books read. 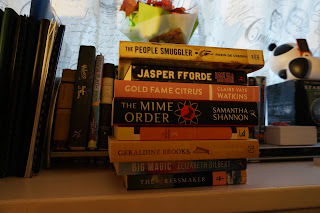 The Dressmaker by Rosalie Ham

This is the novel on which the Australian film of the same name is based.  It is the story of a small, remote town in the Australian outback, and the way all their nasty prejudices come back to bite them in the arse when Myrtle 'Tilly' Dunnage returns to town after being sent away as a child for her part in a tragic accident.  This book was all over the place.  There was no clear sense of who the main character was, although we assume it's Tilly because the book is titled after her, and the macabre yet simple plotting and writing style distance the reader so that the events of the novel never really hit home.  One of the book's more upsetting events left me annoyed rather than upset; the death of a fairly major character appeared to come out of nowhere and did not service the plotting or the character's journey in any real way.  Perhaps this book reflected the strangeness of real life, but I've come to respect a degree of clever deliberateness in my novels, no matter the genre.

I had to declare myself an Elizabeth Gilbert fan after reading this treatise on living creatively.  Liz Gilbert's practical, no nonsense approach to leading the best possible life for nurturing your creativity made a lot of sense and it was incredibly satisfying.  Now if only I could follow her advice and get to work...  This book appeared in my Top 10 for 2015.

The Secret Chord by Geraldine Brooks

This was my first Geraldine Brooks novel, although I do own a few of her other books, I just haven't got to them yet.  The fictionalised account of King David was told from the point of view of Natan, the prophet, as he collects the stories surrounding King David and his rise and fall.  The book was slow to start and I found the biblical nature of the book a little boring, but at its apex, the book became a riveting work of literary historical fiction and at the end of the book I was glad I had read it.

The final Sleepers Almanac was published this year, which is quite sad.  I've discovered a number of talented Australian short fiction writers through this publication, which is put out by Louise Swinn and Zoe Dattner of Sleepers Publishing.  Some of my favourite short fiction writers are included in this final edition, including Laurie Steed, Sophie Overett and Ryan O'Neill.  The most memorable story had to be 'The Fat Girl in History', by Julie Koh.

The Mime Order by Samantha Shannon

The second instalment in the epic fantasy series by Samantha Shannon, a British writer who is my own age and has been compared to JK Rowling by reviewers.  I inhaled this book on a flight from Brisbane to Perth and it was just the kind of engrossing fantasy read I needed.  I could barely remember the plot of The Bone Season (book one) but that didn't affect my enjoyment at all.

Lost in a Good Book by Jasper Fforde

Book 2 in the Thursday Next series.  I found this really strange, and while people think the books are comparable to Douglas Adams, I wouldn't go that far.  I almost gave up on this book, because I found his use of ridiculous coincidences just really bad plotting, but in the end, the sheer awesomeness of literary references (I mean, come on, hanging out with Miss Havisham!) saved the day.

This is the story of one of the most notorious people smugglers ever caught by the Australian authorities, in close to his own words as told to filmmaker Robin de Crespigny.  It is such a readable and relatable account and it really forced me to alter my perspectives.  I think it's a very important book and I am ashamed that before now I'd written it off as something I was never going to read.  Not that I am anti-asylum seeker, but it had never been an issue I wanted to know more about before.  de Crespigny's account changed that.  This was a book club book and we interrogated all aspects of the book at our last meeting, which made for a really successful session.  I saw Robin speak at Margaret River Writers Festival in 2014. The lovely poinsettia in the background of this photograph were a gift from the Aussie Orientation Services book club who visit the shop where I work once a month.  So nice!

That's it for now.  Still hoping to reach 110 books completed by the end of the year but being nearly 30 books behind target according to Goodreads, I fear that time is against me.
Labels: book reviews australia book reviews online books read fiction reviews monthly catch-up reading roundup reviews