Book Review: The Words in my Hand by Guinevere Glasfurd

Helena Jans is a maid, living in Amsterdam in the 17th century.  She is employed by Mr Sergeant, an English bookseller who is a far kinder employer than Helena expected, particularly considering that she is able to write.  This is a skill far above her station, but it is also the thing which makes Helena interesting to Mr Sergeant and therefore begins her adventure.

Helena prepares the guest quarters for an important lodger, the philosopher Rene Descartes, whose presence at the bookseller's house causes a stir.  Along with his valet, known as Limousin, Descartes disrupts life at Helena's home and changes her life forever.  Determined to master the quill, Helena has been practising, using ink made from beetroots and paper made of whatever she can find-- thinly baked pastry, the tabletop and even her own skin.  Naturally, Helena and Descartes are fascinated by one another, or else this wouldn't be much of a story. 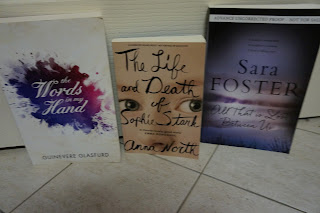 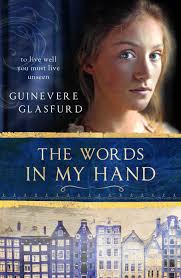 The rest of this review may contain spoilers.

I love this kind of historical narrative-- something plucked from the obscurity of the archives and turned into a compelling story that makes the reader want to know more.  I know very little about Descartes (in fact, nothing), but the complex portrait of him in the novel made me want to find out more.  Helena Jans was a real person, and the events of the novel are largely based on real life, though I am sure that some elements of the plot are based on either rumours from the time or invention.  There are simply things that cannot have been recorded or known and were a novel simply to follow recorded fact then it wouldn't be worth reading in my opinion, for what the historical novel gives us is a measure of emotional truth which links past and present.  While Descartes is anything but a romantic hero, Helena is anything but the helpless victim, the poor little maid waiting to have her Cinderella moment.  She is something of an early feminist, helping her neighbour Betje gain literacy while fighting to keep a measure of autonomy by practising her own letter and eventually even writing her own children's book though she is told that no one will buy it if they know it was written by a woman.  Yet she is also human, and suffers horribly under the circumstances prescribed on her relationship with Descartes.  No one may know that they are a couple, yet Descartes still desires Helena as his sexual partner, putting her at risk of unwanted pregnancy (even this she eventually gains some semblance of control over, though as we know, this is an inexact science.)

As with most narratives of this kind, the ending is dictated by what really happened, and while the novel was no fairy tale, I was quite satisfied by the conclusion that was given to Helena-- for it was her story that really mattered, and her voice being restored.  For me, this book was like The Miniaturist meets The Other Boleyn Girl.  It was a novel of many layers, and the deeper the reader cares to think about it, the more they will get out of it.