The End of the Festival

The Perth Writers Festival is over for another year, and it was an especially wonderful year for me.  This year I was lucky enough to be allowed to chair a few sessions.  I was absolutely overjoyed that they would let me do this, and after I got over the initial anxiety about having to talk to wonderful, talented writers in front of a crowd, I really enjoyed myself. 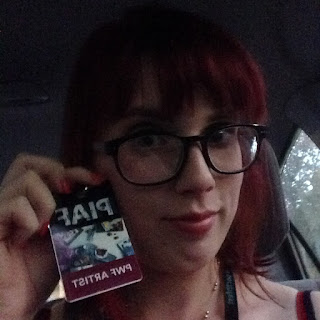 I chaired two sessions, the first a panel the Friday afternoon with Catherine Lacey, Laura van den Berg and Miles Allinson during which we discussed introspective narrators, and the second a one on one interview with Lauren Groff.  Lauren's most recent novel is called Fates and Furies and it is really truly excellent.  I have since bought a copy of all of her other books-- or at least those that I could find.  My Friday session was extra special, because as I entered the venue, I surveyed the crowd and discovered my grandfather sitting in the audience.  If he's reading this, and I know that he is, it really meant a lot to me to have him there, and it meant even more to me to hear later that he was proud. 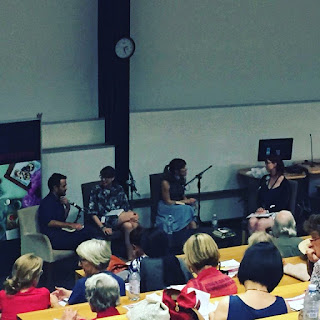 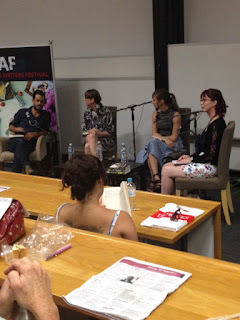 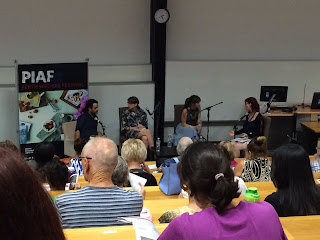 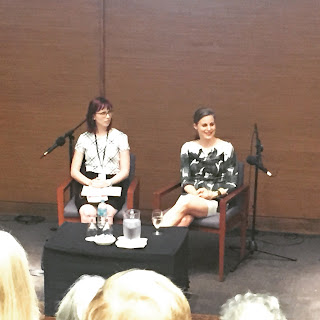 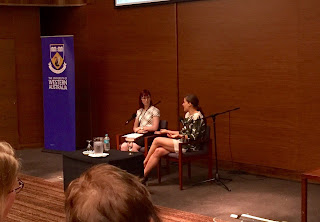 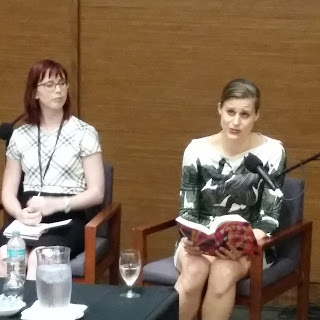 I have grabbed some of these photos off of people who tweeted after the event, so to all of those people, thank you!

Aside from this busywork, there was also the usual fare of attending sessions, staking out the good coffee (the cart near the Dolphin Theatre, if you are wondering!) taking notes, talking to writers and being immensely inspired.  A few sessions that were real highlights included:

Breaking the Mould
A session with Guinevere Glasfurd, Helen Ellis and Charlotte Wood chaired by Amanda Curtin in which we discussed novels by women, featuring unconventional and powerful women as characters.  Charlotte Wood's book The Natural Way of Things was a highlight of my reading year last year, and Guinevere Glasfurd's The Words in My Hand has been a highlight of this one.

Undermajordomo Minor
Annabel Smith interviewed Patrick deWitt, who was funny and laid back and charming, and they had such a rapport going that it was a real delight to watch.  I have also recently finished Undermajordomo Minor and I'm now keen to read deWitt's Man Booker listed novel The Sisters' Brothers.  I'm also told that he was in the audience when I chaired my first panel, which I'm sort of glad I did not know until after!!

A Novel Form
Laurie Steed, short fiction expert, interviewed Fiona McFarlane, Laura van den Berg and Gregory Day about working with different forms, and there were some real pearls of wisdom shared in this session.  What was most useful to me was when Fiona McFarlane stressed the importance of patience-- that the work needs to be separate from the age you wish to publish it at.  For someone who declared on her blog she wanted to publish a book by age 20 and at 24 still hasn't done it, this rang very true!

Reimagining
A session chaired by Ian Reid with Lucy Treloar, Shirley Barrett and Guinevere Glasfurd about writing historical fiction-- this was very useful to me, because the book I am currently working on features a historical narrative about a real person.  I found some of the ways these women approached their work very interesting and I have a lot of notes to go from!

Trade Secrets
I didn't mean to go to this session, but I found myself with time to kill, and so I went along to see John Harman interview Ann Turner, Aoife Clifford and Peter May about how to write compelling fiction.  This session unlocked something in my mind because I kept thinking of things to do to my project!  I also now really want to read Aoife's and Ann's books... Ann's in particular because it stars an archaeologist and I find that area of study fascinating. 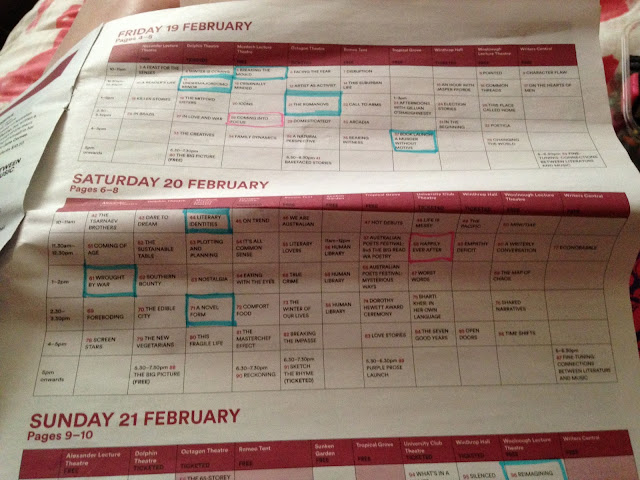 Finally, this afternoon I did a course on historical fiction with Guinevere Glasfurd called History's Fragments, Fiction's Treasures.  It was incredibly useful-- Guinevere used examples from her own novel, as well as quotes from other well known writers to teach us about ways to approach writing between the gaps of the written record.  She said one of the most important things, which was 'Don't libel the dead' and I hope that I can manage to keep this at the front of my mind as I write my own project.