Waer
Meg Caddy
Text Publishing 2016
(I was provided a copy by the publisher in return for an honest review.) 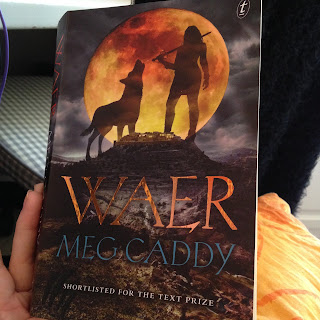 There came a time, a few years ago, when the market was so saturated with vampire and werewolf stories that the thought of reading another one would have made me run for the figurative hills.  But I was intrigued by the premise of Waer, the debut novel by Perth-based writer Meg Caddy which tells the story of Lowell Sencha, a Waer man who must fight for the rights of his people when faced by the prospect of extinction under the rule of a cruel, purist overlord.  Waer culture, rather than simply being a trendy, supernatural buzz-topic, is a fully-realised social world in this novel, with history, traditions and even a set of specific gods.  The Waer people, like the werewolves of the old horror movies, can turn from human to wolf, but unlike in the stories, they are able to do this at will, and there is no mention of the full moon.  Instead, Shifting can be a delight for Lowell and his family; it can heal wounds, for instance, and seldom does a Waer attack a human or feel the need to go on a killing rampage.

In the development of this culture of people, it is clear to see the influence of Caddy's friend and mentor, fellow Perth fantasy writer, Juliet Marillier-- whose most recent series Blackthorn and Grimm has roots in Irish mythology and history.  Like in Marillier's Dreamer's Pool and Tower of Thorns, the world-building in Caddy's novel is superb, from the map at the beginning right through to the mythologies held dear by the book's central characters.  I enjoyed searching for links between the world I know and that on the page, and while some of the terms remain foreign to me, such as 'chipre-folk', I never felt lost or befuddled.

So too is the characterisation in Waer a delight.  The book is told from two points of view; Lowell's, and Lycaea's (and didn't I get a thrill from connecting Lycaea with Lycanthrope!)  Each voice is surprising and well-rounded.  Lowell is a sensitive and spiritual boy, family-minded and raised in a calm, rural environment where he has always felt safe.  Contrasted with this, Lycaea is from a community of brigands, and is a skilled fighter.  When the two meet, she has just escaped torture at the hands of the man who will become the book's antagonist, Daeman Leldh.

At a glance, this novel has all the fast-paced action and enjoyment of the first Eragon novel, but it is far more layered and original.  It is smart, funny and wonderful, and will appeal to a wide audience, from readers aged 12 and up (though the content may be violent for some younger readers).  None of this is to say that adults will not love this book as I did.  I couldn't put it down, and I am so very proud of Meg Caddy in what she has achieved.  There is something in the water in Perth, as Meg joins a talented catalogue of local authors, and I look forward to seeing what she comes up with next.
Labels: #loveozya book review book reviews australia local author meg caddy text publishing waer